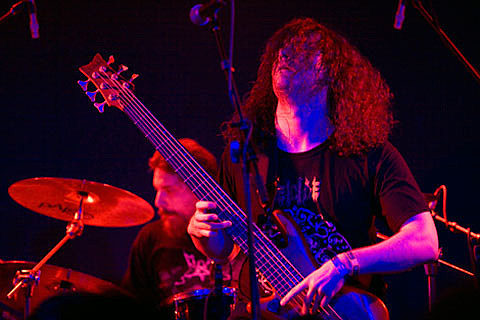 A reminder, Krallice play Shea Stadium tonight, 10/7, with fantastic support from Infernal Stronghold (a must see) and Concussion. The show will be a prelude to the band's headlining appearance at the Fall Into Darkness Festival which kicks off on the same day in Portland, Oregon. Featuring headlining sets from Black Cobra, Fauna, and Earthless in addition to the previously mentioned Krallice, the festival will also feature appearances from Fell Voices, Worm Ouroboros, Wildildlife, Deadsea, and many many notable others. If you are fan of heavy music and will be anywhere in the Pacific Northwest next weekend, this is the festival to go to. Full sked is below, including ticketing info by day. A four-day pass is also available.

Meanwhile, Fall Into Darkness 2009 has made it's way onto DVD. The video, which contains footage of 2009 participating bands Earth, YOB, Agalloch, Ludicra, Saviours, Amber Asylum, Witch Mountain, and many others, is currently up for sale at the FOD site. Pick one up.

Festival sked and the trailer from the 2009 edition is below.