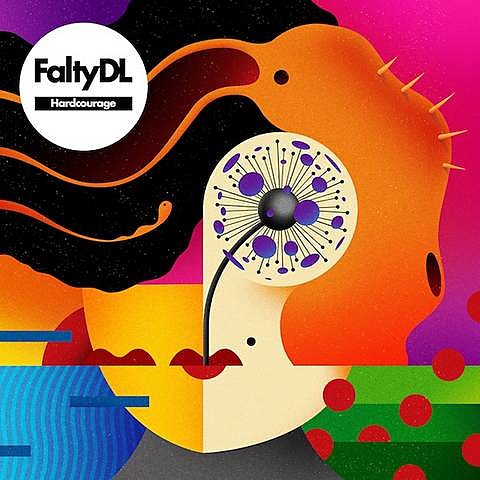 As mentioned, FaltyDL has been at work on his new album, Hardcourage, which features the single "Straight & Arrow." Details on the album have surfaced and we now know that it comes out on January 22 via Ninja Tune. That's the awesome cover art above [very Barney Bubbles - Bill] and the tracklist, including "She Sleeps," a collaboration with Friendly Fires' Ed Macfarlane, is below. The "Straight & Arrow" single comes out next week (11/13) via Ninja Tune and features remixes by Four Tet, Gold Panda, and MikeQ & Divoli S'vere. FaltyDL also just revealed the video for that track, which you can watch below.

As mentioned, FaltyDL will play Webster Hall on December 7 with Skream, but you can catch him in NYC sooner than that because he's been added to the Brooklyn Electronic Music Festival, which happens this Friday (11/9) and Saturday (11/10). FaltyDL plays Cameo Gallery on Saturday with Pearson Sound, Benji B, and Ki:Theory.

Since we last spoke, the Brooklyn Electronic Music Festival has revealed more of its schedule (some of it is still TBA though). You already know that Music Hall of Williamsburg is hosting Gold Panda and Photek on Friday and Nicolas Jaar and Nick Hook on Saturday. In addition to Cameo's aforementioned Saturday lineup, on Friday they have Metro Area, Braille, Brenmar, Mykki Blanco, and Mess Kid. Glasslands has Kingdom, Nguzunguzu, Jam City, MikeQ, and Rizzla on Friday, and Baths, XXYYXX, Hiawatha, and ShadowBox on Saturday. Lineups are still TBA for Public Assembly, Brooklyn Bowl, and Villain. Tickets for the festival are still available.

FaltyDL video and album tracklist below.