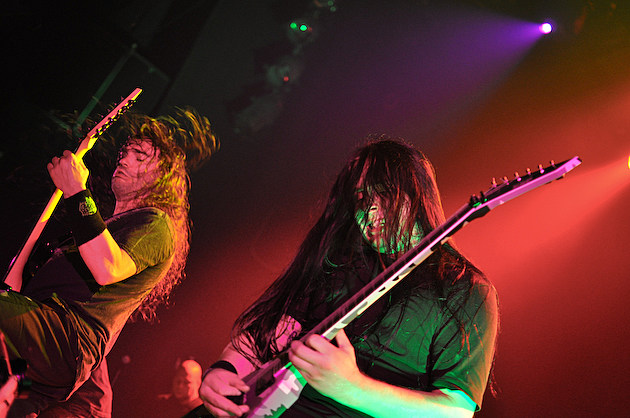 A fan was stabbed in the neck during Broken Hope's set last night at the El Paso stop of Deicide's "No Salvation" tour, according to El Paso NBC affiliate KTSM and Broken Hope's social media accounts. Broken Hope posted the following to its Facebook page shortly after the incident occurred:

BROKEN HOPE just learned a fan got their throat cut with a box cutter during BROKEN HOPE's set tonight in El Paso. Cops and paramedics are all over the place.
Please send warm wishes to this fan.

KTSM is reporting that two people were hospitalized at University Medical Center with serious injuries after an altercation took place around 11 PM. A witness said he saw two people fighting in a mosh pit until other concertgoers pulled them apart.

The incident occurred at the El Paso venue Tricky Falls, where Broken Hope served as first support to Deicide on a tour that also included Necronomicon and Disgorge. Invisible Oranges gave away tickets to the tour's NYC stop on Invisible Oranges on East Village Radio. The "No Salvation" tour wraps up on Thursday, October 24 in Austin, TX and is scheduled to play Dallas tonight, Wednesday, October 23.

Broken Hope reformed last year after a roughly ten year hiatus and released their first album since 1999, Omen of Disease, earlier this month.