"fanfarlo was amazing last night. the experience left me inspired to be happy!" - Christy Gurga 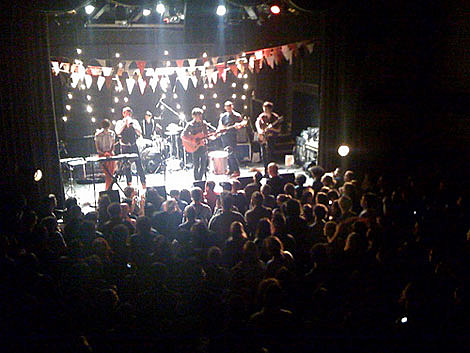 "Given the mere nine or so songs they played [at Chop Suey in Seattle on September 14th], jet-lagged or no, an encore was definitely in the offing. Nobody was leaving and everyone was clapping and expecting something. Promptly arriving back on stage, plastic tubes were handed out to the crowd to twirl above their heads, an opportunity for the audience to whimsically provide the high-pitched background hum for "Ghosts." It worked out better than I could have imagined (though the taller members of the crowd were probably not all that endeared by a constant threat to their head from all sides). After some mulling over requests, "Fire Escape" was decided as the second song of the encore.

Even after the house music came up, earnest chants of "One More Song! One More Song!" rung out until the band came back for a second encore. I honestly can't remember the last time I saw something like that with a new band like this."
[Sound on the Sound]

Fanfarlo kicked off their US tour in Seattle last week and are now in the midst of a two-night NYC run. If you missed them last night at Bowery Ballroom (9/21), you have another chance tonight (9/22) at The Bell House in Brooklyn (tickets are still available). Wildbirds and Peacedrums opened last night, and they do again tonight. Jonsi and Alex won't be there again tonight though.

If you miss both, or even if you saw both, it won't be long before there's another chance to catch the London-based band in NYC. Fanfarlo are coming back for CMJ, and you'll have at least two chances to see them then. On October 21st they'll be at Bowery Ballroom again. That time it's with Midnight Juggernauts, The Postelles, TigerCity, Findlay Brown, and Freelance Whales (tickets). On Tuesday, October 20th (one night before Bowery), you can catch them at the official BrooklynVegan CMJ show at Music Hall of Williamsburg. Full lineup for that one to be announced shortly (and tickets will be on sale soon).

A video from the above-reviewed Seattle show, below...