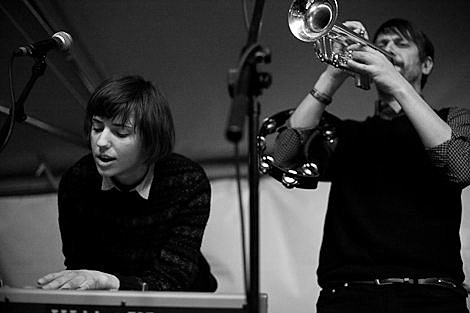 Fanfarlo will return soon with a new album and some shows. In July Paste talked to the band...

...the group has been working on the follow-up to Reservoir with producer Ben Allen, who's worked with the likes of Animal Collective and Deerhunter.

"We really liked Ben's style," said Simon Balthazar, Fanfarlo frontman. "We must have talked to a dozen different producers, but it really worked out [with Ben]. He's a really great guy, he had just really good ideas. We definitely got the most out of each other."

Balthazar and his band mates recently wrapped up recording their new album with Allen, and are expecting to release it in early 2012.

"It's been a long, pretty intensive process," said Balthazar. "We just came off the road in September, so we just kind of sat down, wrote an album, went and recorded it in the studio in the countryside in Wales."

Sounds good. Expect a preview of some of those songs in a live setting when the band returns to North America for at least two shows in October. They play Mercury Lounge on October 27 and Glasslands on October 30. Tickets for the Mercury show go on sale Friday (9/9) at noon with an AmEx presale starting Wednesday (9/7) at noon and tickets for the Glasslands show are on sale now. No other dates to speak of yet, but stay tuned, and check out a video below...