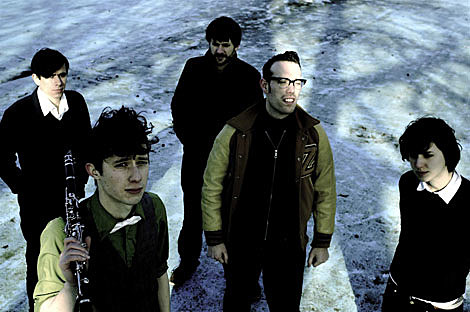 London's Fanfarlo will play Mercury Lounge in NYC on September 21, their first NYC gig since CMJ last year. At the time, the band were recording their debut album in upstate New York with producer Peter Katis (The National, Interpol). That album, Reservoir, has since been released and it's quite the stunner if you ask me, full of swooning epics that fall somewhere between Belle & Sebastian and The Arcade Fire. The band self-released it in February, mainly available at at their shows and are currently selling 320 KBS downloads of it for one dollar via their website 'till July 4, one of the best bargains around. The download comes with four songs not on the CD version of the record. For a taster you can download "Luna" at the top of this post.

Fanfarlo's performance at Austin's Central Presbyterian Church made my Top Ten Shows at SxSW 2009, and I've seen them three times now. Alll were great. I'm hoping they'll add a couple more shows to their NYC visit in September, crossing my fingers for the Bell House -- that would be the perfect place for them I think. In the meantime, tickets for the Mercury Lounge show are on sale.

All announced tour dates and some videos, including one of the band covering Bonnie Prince Billy, after the jump....

Fanfarlo - "Luna" in an English Garden