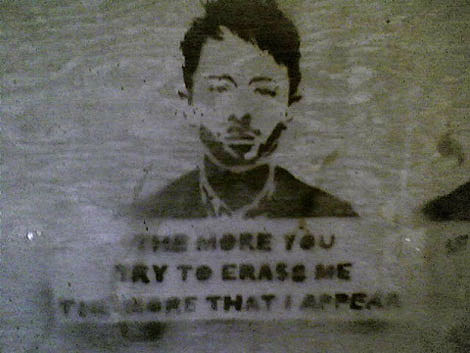 A rumor is going around that Thom Yorke is here and possibly performing, but Men.Style.com says...

I've got some good news and some bad news for all you fashion, music, and fashion music fans. The bad news first: Despite the rumors Twittering around the Interwebs, Thom Yorke will not, in fact, be playing tomorrow's Rag & Bone show. The good news, however, is that the Radiohead singer did "curate" the tunes that'll accompany the models down the runway. Guess he's returning the favor after the nice bomber jacket the lads hooked him up with for the Grammys. (Notably, Lil Wayne also wore the brand last Sunday--who knows, maybe he's hard at work on a playlist for Spring 2010.) In any case, autograph seekers should leave the Sharpies at home, as I'm told Yorke won't even be at the show. (I assume the same's true for Wayne.)

In other Thom Yorke news rumors, EW says that "Radiohead's publicist assures me that rumors of frontman Thom Yorke contributing music to McG's movie Terminator Salvation are, yep, just rumors -- something that everyone who's at all familiar with the respective oeuvres of Thom Yorke and McG already knew."

This is the second time Terminator Salvation came up recently. The first was because of Christian Bale freaking out.

Leave more party tips (if you have them) (preferably ones where bands are playing) in the comments.

Filed Under: fashion week, Grammys, James Murphy, Lemonade, Lil Wayne, Mike Nouveau, Radiohead, Spank Rock, The Duke Spirit, The Virgins, Thom Yorke
Categories: Music News, style, What's Going on Tonight in NYC
Comments
Leave A Comment
36 New Songs Out Today
The Callous Daoboys’ mathcore is for everyone: “I don’t want to be this middling heavy band, I wanna be The 1975″
“There’s no Radiohead at the moment,” says Ed O’Brien
Watch The Smile’s music video for “Pana-vision” ft ‘Peaky Blinders’ footage
Notable Releases of the Week (7/15)
Grammys moving back to February and Los Angeles for 2023