Fat Creeps in the studio

Boston's Fat Creeps released their debut EP last year and they're now in the studio, halfway done with their first full length. The band recently revealed two tracks, "Dad Weed" and "Daydreaming," which will appear on the album, as well as their split with Zebu. The songs pick up where the EP left off with rollicking guitar and a lazy Sunday drawl from the band's two singers. You can stream both tracks below.

Fat Creeps are playing some Northeast shows this winter, including a 'Party Weekend' with Philly shitgaze punks Slutever in Brooklyn, NY and Providence, RI this February. The Brooklyn show happens on February 9 at Death by Audio and Mannequin Pussy is also on that bill. Admission is $7 at the door.

All dates for Fat Creeps and Slutever, those song streams, and the 'Party Weekend' flyer below...

Slutever - "I Can Dream the Rest Away" 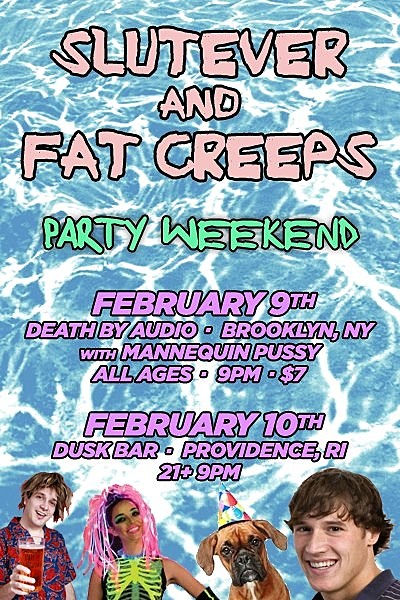