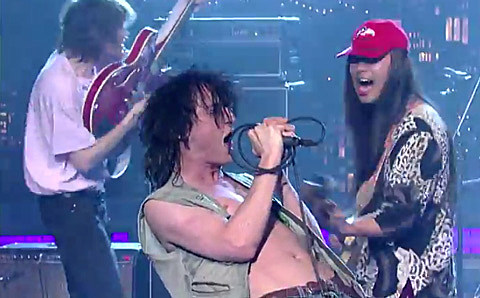 Fat White Family were in NYC this week, playing a sold-out late show on Tuesday (3/31) at Mercury Lounge (how was that show?), and then made their network television debut on The Late Show with David Letterman on Thursday (4/2). "You don't see that every night!" chuckled Dave after their performance of "Is It Raining in Your Mouth?" which was fairly restrained for the Fat Whites, but probably crazier that what you normally see on Letterman. Check out the video below.

Fat White Family will be touring North America again in about a month, including another NYC show: April 30 at Music Hall of Williamsburg. Tickets are still available. That's right before they head to Austin's Levitation Festival. Updated dates are listed, along with the Letterman video, below...