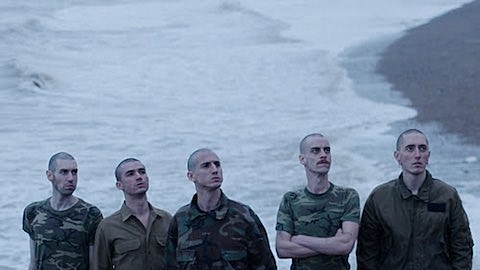 Fat White Family's new album is titled Songs For Our Mothers and will be out January 22 via Without Consent / Fat Possum. The LP, the UK band's second, was co-produced by the band and Liam Trashmouth and recorded in the UK and upstate NY. (One song, "Satisfied," was produced by Sean Lennon.) Say the band:

While our first LP might be considered an assault, a spasmodic outpouring of disdain generated by the utter tedium of life when it is found unlivable, Songs For Our Mothers is an invitation. It is an invitation, sent by misery, to dance to the beat of human hatred. In it we ask that you take us gently by the hand as we lead you on a journey, a journey that leads us from the blinding white heat of a midday Mediterranean shore, to the embattled boudoir of Ike and Tina Turner, from the clotted grey droll of Dr Harold Shipman's waiting room, to the final hours of the Third Reich in the Berlin bunker.

It is as much a catalogue of our obsessions as it is a sensual odyssey; sex, drugs, politics, death, the Northern Irish A-lister Sam Neil, it's all here, all that's left to do now is breath it in.

We'll also get an album from FWF side project The Moonlandingz at some point next year. Meanwhile, you can check out Songs For Our Mothers' tracklist, as well as a list of upcoming European tour dates, below.