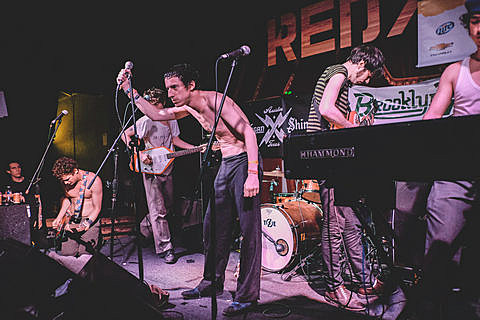 Sleazy psychedelic rockers Fat White Family will be coming back over from the UK for another North American tour leading up to their previously announced appearance at Fun Fun Fun Fest. This tour hits NYC on October 18 at Bowery Ballroom, a much larger space than their last NYC shows at Acheron, Union Pool and Shea. Tickets for that show go on sale Friday (6/27) at noon with an AmEx presale starting Wednesday (6/25) at noon. All dates are listed below.

The Fat Whites also recently announced that they started their own label, Without Consent (named after the song of the same name on their 2013 debut LP, Champagne Holocaust). The label is a subsidiary of [PIAS] Cooperative, and they're planning on releasing a new album on the label in 2015. They're also looking into signing other artists and doing some reissues too.

List of tour dates, with a live video from SXSW, below...