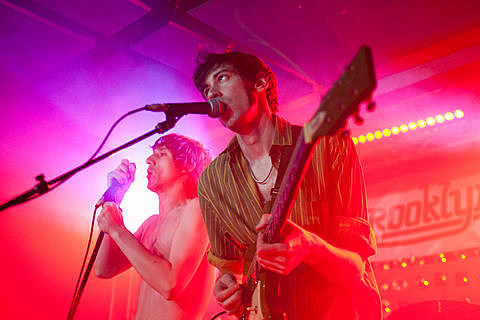 Fat White Family, the wild no-fucks-given UK psych band now located in NYC, have announced two one-offs in their new hometown, ahead of the UK 'NME Awards Tour' they're going on in February/March with Palma Violets, The Amazing Snakeheads and Slaves. The NYC shows happen December 20 and January 10 at Baby's All Right, the same venue they annihilated twice in one day at the BrooklynVegan CMJ shows in October. They're part of the band's monthly residency that they used to have in the UK and mentioned they would now do in NYC. Tickets for 12/20 and 1/10 go on sale at 10 AM on Friday (11/21).

UPDATE: The January 10 show was rescheduled to December 13 (tickets).

All dates are listed, with a video from BV-CMJ, below...