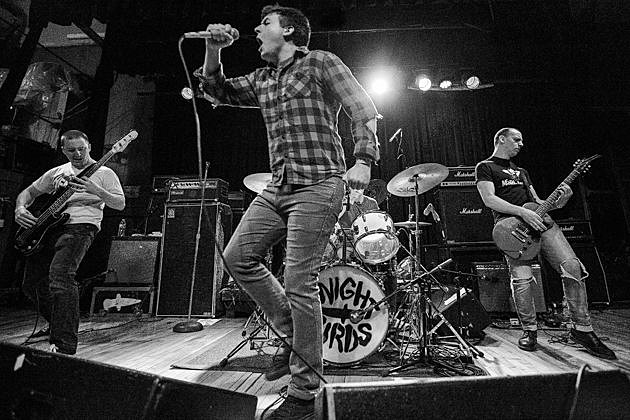 As someone who grew up listening to a lot of '90s punk, the Fat Wreck Chords Fat Music compilations were a godsend. (Along with Punk-O-Rama and Hopelessly Devoted to You.) They usually didn't cost much, and they could squeeze 15-20 bands onto one disc (or sometimes over 100). A lot of my early music memories are of those comps as much as they're of individual bands' albums (Fat Music for Fat People and Survival of the Fattest were particular favorites), but for whatever reason I don't seek out label comps anymore. Maybe because they're released less often, because I don't spend much time CD shopping anymore, or because it's now easier to hear what a label has to offer from their website. Probably a combination of all three.

Fat hasn't actually released a new one since 2010 but that will change on August 7 when they put out their first Fat Music comp in five years, Fat Music Vol. 8: Going Nowhere Fat. It's got a good mix of the same bands you saw on these things in the '90s -- NOFX, Swingin' Utters, Good Riddance, Lagwagon, Strung Out and more -- plus cool newer bands like Night Birds and toyGuitar.

The Night Birds song, "Left In The Middle," just came out today and it does what Night Birds do best -- mixes '80s surf punk with '90s skate punk, yet sounds totally fresh. It's got a particularly ripping guitar solo too. Listen, and check out the Fat Music Vol. 8 tracklist, below.

The label is also celebrating its 25th anniversary this year with a tour that has NOFX, Lagwagon, Strung Out, Swingin' Utters and more. Good Riddance are also touring this year.

Night Birds - "Left In the Middle" (via AV Club)