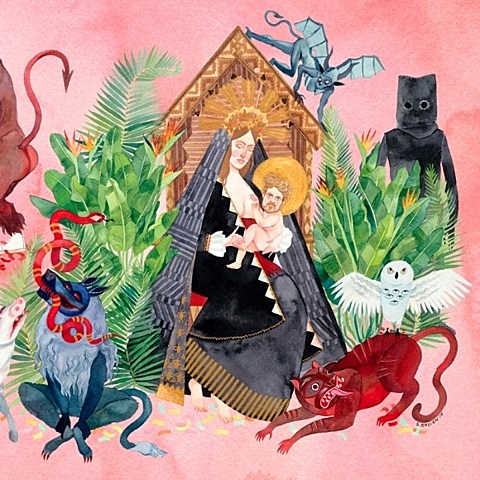 Former Fleet Fox Josh Tillman has announced his second Father John Misty album, following his 2012 debut, Fear Fun. It's called I Love You, Honeybear and will be out on February 10 via Sub Pop. It was produced by Josh himself along with Jonathan Wilson, mixed by Phil Ek, and mastered by Greg Calbi, all of whom also worked on Fear Fun. Last night (11/3) he debuted its song "Bored in the USA" on the "Late Show with David Letterman," backed by an orchestra. You can watch that video and check out the LP tracklist below. Album artwork above.

FJM will support the new album on a tour with a 7-piece band around its release. That includes a run with The Entrance Band's Guy Blakeslee that hits NYC on February 12 at Rough Trade NYC and February 14 at Bowery Ballroom. Tickets for those shows will be on sale soon via Ticketmaster.

All dates are listed, with the 'Letterman' video and LP tracklist, below...

I Love You, Honeybear Tracklist:
01 I Love You, Honeybear
02 Chateau Lobby #4 (in C for Two Virgins)
03 True Affection
04 The Night Josh Tillman Came To Our Apt.
05 When You're Smiling and Astride Me
06 Nothing Good Ever Happens At the Goddamn Thirsty Crow
07 Strange Encounter
08 The Ideal Husband
09 Bored In The USA
10 Holy Shit
11 I Went To The Store One Day

* with Guy Blakeslee
+ with King Tuff
^ with Luluc