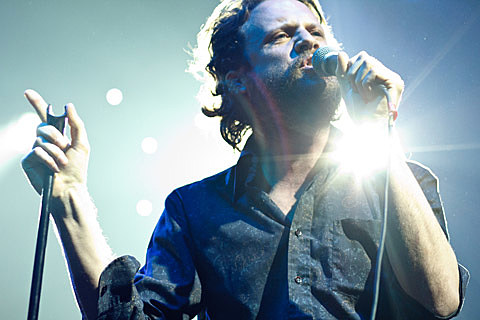 Father John Misty, the current project of former Fleet Foxes member Josh Tillman, is continuing to chronically tour internationally over the course of the next few months. His last NYC show was a sold out gig at Webster Hall and he'll be returning to the area for a far more intimate show at Hoboken's Maxwell's on May 17. Tickets for that show go on sale Friday (2/1) at noon.

That show, like most of his spring US run, is with Adam Green (Moldy Peaches) and Binki Shapiro (Little Joy), whose new album together was released today. You can stream it below via Spotify and check out the video for "Just to Make Me Feel Good," which was directed by Dum Dum Girls bassist Malia James.

Meanwhile, FJM recently recorded an acoustic version of "Hollywood Forever Cemetery Sings" live at TRI Studios. A video of that performance and a list of all dates are below.