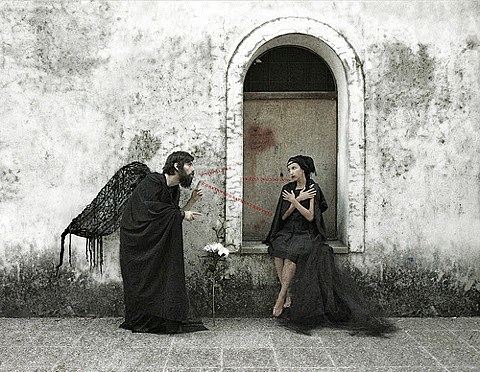 Father Murphy, the bewildering experimental band that has called Brooklyn, Berlin, and Italy home, is back in America for a number of live events. In San Francisco and Los Angeles, they'll be providing a live score for Luca Dipierro's Paper Circus, a collection of short animated films, one of which you can see below. Then the outfit is off to Mexico, eventually heading back north in October for shows in Montreal and Chicago. They come NYC's way, dropping in at the Acheron on October 9 with Oneirogen, Of Earth & Sun, and Theologian. Tickets are available now. The full list of dates appears below.

We premiered a track from Father Murphy's January release Pain is On Our Side Now, calling it, "soaked in abrasive noise, and terrifyingly dark textures, and strays pretty far from anything resembling a conventional pop song." You can trip out to the full release below.

Theologian, meanwhile, are just off of playing with Megaton Leviathan and will be re-releasing a vinyl version of their charred-black, industrial/noise tumult Some Things Have To Be Endured on September 15 (preorder). Oneirogen is the intensely heavy project of guitarist Mario Diaz de Leon, squashing listeners with thick drone-y riffs. And Denverite Matthew Hunzeker's Of Earth & Sun tags himself as 'ritual drone' and 'ritual industrial,' delivering a hypnotic and primal feast of sounds recalling Tribes of Neurot at their most death-obsessed.

All of the dates are listed, along with a Luca Dipierro film and streams from the bands, below...