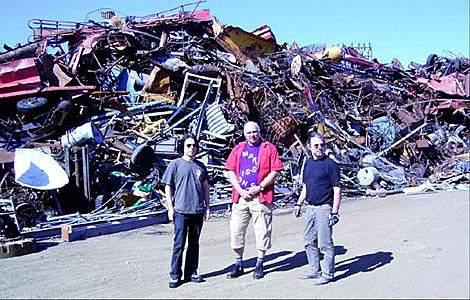 "Formed 1969 in Hamburg, Germany and considered the inventors of "Kraut Rock", iconoclasts extraordinaire Faust are key figures in 20th Century music. In the early 70's, along with Can and Kraftwerk, they re-invented pop music as a specifically European art-form. In their own studio they were able to revolutionize the whole process of musical production; they improvised with industrial noise, generated bizarre hypnotic grooves, indulged in shockingly willful studio-based collages, and dabbled with every conceivable musical genre, sometimes simultaneously. Every now and then they found time for a burst of satirical pop or waves of delicate ambience. Amongst those Faust have strongly influenced we must count Brian Eno, Joy Division, Cabaret Voltaire, Test Department, Neubauten, My Bloody Valentine, Julian Cope, Sonic Youth and a host of Industrial and Techno bands. The music has lost none of its immediacy or relevance--it sounds as if it was recorded last week, not last decade.

The touring members of this 2009 US Faust tour are original members Jean-Herve Peron and Werner "Zappi" Diermaier, along with James Johnston (Gallon Drunk, Lydia Lunch, Nick Cave and the Bad Seeds) and visual/video artist, painter, and musician Geraldine Swayne.

Faust kicks off that 2009 US tour on September 25th at The Orange Peel in Asheville, North Carolina at a co-headlining show with Sunn O))). From there they tour through October 11th while hitting Pop Montreal (10/3) and Music Hall of Williamsburg in Brooklyn (10/1) along the way.

The Brooklyn show is one of three WFMU Festival days happening at the same venue. Also on the October 1st bill is Cold Cave (more on them later) and Aluk Todolo (more on them later too). Tickets go on sale Thursday, September 3rd at noon. All Faust dates and a video below...