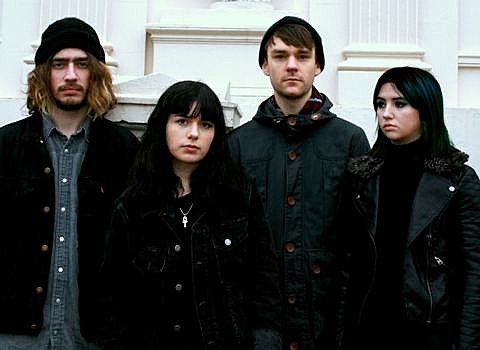 You may already know UK indiepop quartet Fear of Men will be here after SXSW, playing Pianos on March 20 (tickets). We had a feeling they'd add more shows and they just announced one at Glasslands the day before (3/19) with BOYTOY and Beverly. Tickets to that show are on sale now.

Fear of Men's singles compilation, Early Fragments, is out next month on Kanine, and you can stream a few songs below, including their cover of The Chills' classic, "Pink Frost."

If you're wondering about the opener Beverly, Fear of Men shed a little light via Facebook. They are "our friends Drew and Frankie who we met when we played with Frankie Rose in the summer." And that would be Drew Citron who has been playing keyboards (and singing) in Frankie's band for the last year or so. (Apparently Drew is the singer here, but we'll see.) Beverly will play NYC before that at The LAB on February 7 with Down Wires, Sapphire Mansions and Our Future. Down Wires is a new band from Scott Rosenthal who currently plays keyboards in Class Actress but this is decidedly more indie rock. (Closer to his band The Gytters if you remember them.) You can stream a couple Down Wires songs below and more info on the show is here.