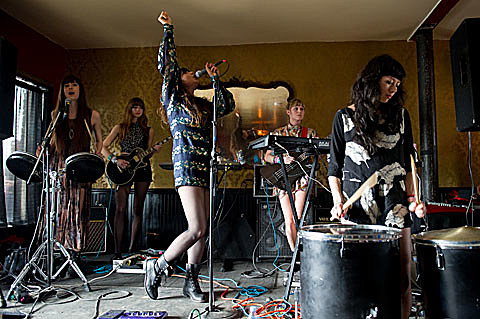 Feathers have barely been together six months but they have clearly spent that time practicing. They have it together and this was one of my favorite sets of the week. Most of their material is of the gothy electro variety, they opened with a Norman Greenbaum-style glammy stomper that I really dug. A lot of instrument switching showcased most of the members of the band. [BV Austin]

Austin quartet Feathers, who played one of our Hotel Vegan shows back during SXSW, are returning to NYC for a show at Glasslands on July 18. Tickets for that show are on sale. That's the only show on Feathers schedule for now, but seems like a long way to come for just one gig, so maybe more are on the way.

You can check out a few Feathers tracks below.