The Feelies on 4th of July (more by Jason Bergman) 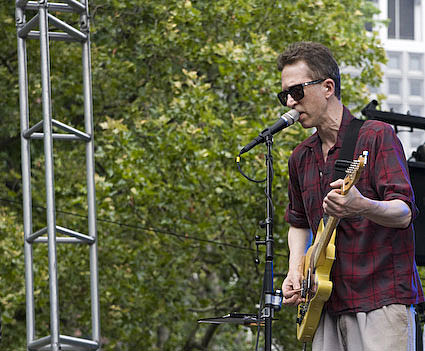 If you're not skipping town for an ocean view, there is no shortage of great music options this weekend.

Independence Day Weekend means The Feelies at Maxwells and tickets are still available for all three shows: Friday (7/02), Saturday (7/03), and Sunday (7/04). The excitement of their 2008 reunion might have faded a bit, but the music has not. The influence of these New Jersey legends can be heard all over releases from Woodsist and Underwater Peoples and their four albums are all worth owning. The first three -- Crazy Rhythms, The Good Earth and Only Life -- are back in print, the first two on vinyl.

If you've seen their Maxwell's shows before, you know they play epic sets, peppered with choice covers and extended instrumental sections. I hesitate to call it jamming, probably because I like when they do it,  but also because it's that interplay between Glen Mercer and Bill Million where The Feelies really come alive. As good as their records are if you haven't seen them live, you've never really heard The Feelies.

The Seaport Music Festival has it's first show on Friday, a double-dose of Texas with Woven Bones and YellowFever. Yes, both bands were here recently (and Woven Bones play tonight, more on that in a minute) but there are several advantages to Friday's show. The Seaport is a great place to see a show, the setting spectacular, especially at sunset. You can drink where you please, it's generally chill, and, most importantly, it's free.

I also think Woven Bones' fuzz-driven scuzz rock is gonna sound amazing through a really big PA. I've only seen them in tiny clubs where the sound doesn't do them justice. What the band lacks in diversity of material, they make up for in being really good at that one thing they do and the louder the better. Seaport sound guy: turn it up.

I've seen YellowFever on big stages and small, and they pretty much are great wherever they are. I just wish they'd get around to writing and recording some new songs. "Making it" has never seemed to be a priority to these two, which is part of their charm, but can also be a bit maddening for fans. There is a new tour EP, according to their MySpace, so let's hope that's actually some fresh tunes. And the band are about to embark on a pretty big tour so maybe we're entering a new era of YellowFever productivity. All YF tourdates are at the bottom of this post.

In addition to the bands, the Lone Star state theme continues at the Seaport this weekend with something called Texas on Tour. They were setting up on Wednesday while I was down there for the last of the Sound Bites Lunchtime shows (yes I have worked with the Seaport folks so, you know, full disclosure) and it looks like some sort of Texas-themed traveling carnival, including a water ride for kids and one of those domed theaters. Yee haw? 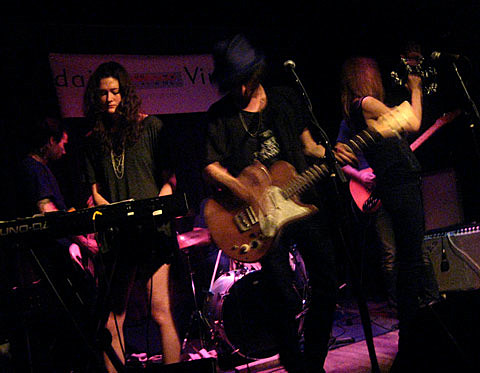 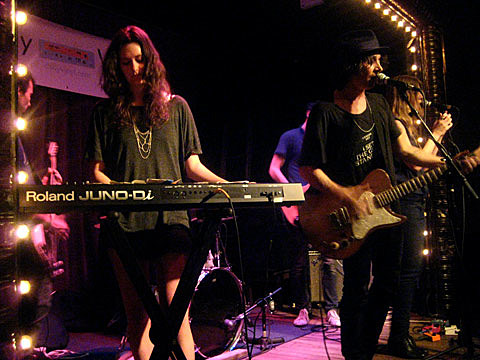 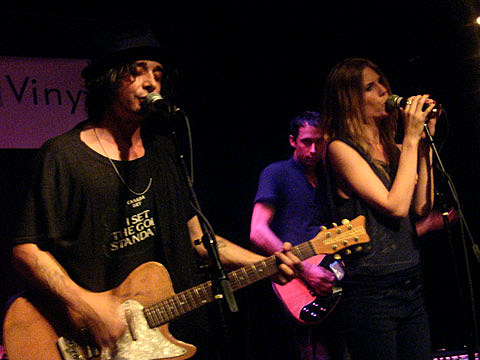 This weekend also marks the debut of a new monthly party that Captured Tracks is putting on at Bruar Falls. The label is becoming a real contender with great debuts from Wild Nothing and Beach Fossils, as well as new signings like London's Veronica Falls, Spain's Aias, and locals MINKS who'll play Captured Tracks Night 001, as Saturday is being billed. No doubt MINKS' debut single, "Funeral Song," owes a bit to the Cure but, as I've said before, the band are much sunnier sounding live (despite all six members wearing black every time I've seen them). Take away the vocal effects on "Funeral Song" and add some female backing, as it does live, and the song moves over to early New Order territory. Compare and contrast the live and recorded versions -- video of the live version shot during the Northside Festival is at the bottom of this post.

Other songs, the names of which I don't know,  while still '80s-ish, are even more poppy, with nods to early records on Creation and Cherry Red. The one unreleased song I really like I shot video of back when they opened for Veronica Falls at Glasslands (also below), which reminds me a lot of Felt. MINKS  have played the same short set all three times I've seen them, but I like all six (five? seven?) songs they do and will be there a fourth time on Saturday.

In addition to MINKS, label domo Mike Sniper will be sharing the decks with Peggy from Pains of Being Pure at Heart, and there'll be a merch table with a wide variety of C/T releases, including a mix tape exclusive to this night. Entry is $5.

And if you can't see MINKS here, they play next Friday (7/9) at Monster Island Basement with fellow Captured Tracks band Wetdog (over from the UK), YellowFever and Larkin Grimm.

I mentioned above that Woven Bones are playing tonight. The show is at Bruar Falls and it's part of a killer line-up also featuring The Beets and Beach Fossils. Any one of those bands might be enough to get you to the show. All three, it's hard to pass up. Beach Fossils were great when they played with Wild Nothing a couple weeks back. If you haven't picked up their album on Captured Tracks, it's highly recommended.

Over at sister venue Cake Shop, Nobunny will be taking off most everything except that mask, which gets grosser looking every time I see them play. Does he ever wash that thing? Also playing are fellow Bay Area residents Apache who will also play Don Pedro's on Friday (7/2) and the Delancey on Saturday (7/3).

Knitting Factory is hosting another one of those Scion Garage shows, this time with Memphis legends The Oblivions who reformed last year. The show, which is free, is also RSVP'd out, unfortunately if this is the first you're hearing of it.

Big Troubles play Cameo Gallery. These guys are giant fans of '90s shoegaze and will talk your ear off about Revolver and Drop Nineteens if you let them. It comes through in their music which they do a great job of putting their own spin on that era's sonics. Their new 7" on Old English Spelling Bee is really good and look for their debut album sometime in the not too distant future. They're playing this night with a bunch of bands I've never heard of, including Slothbear (sludgepop), No Demons Here (K records style cassette hiss), and Gross Relations (whose Myspace songs sound pretty good). 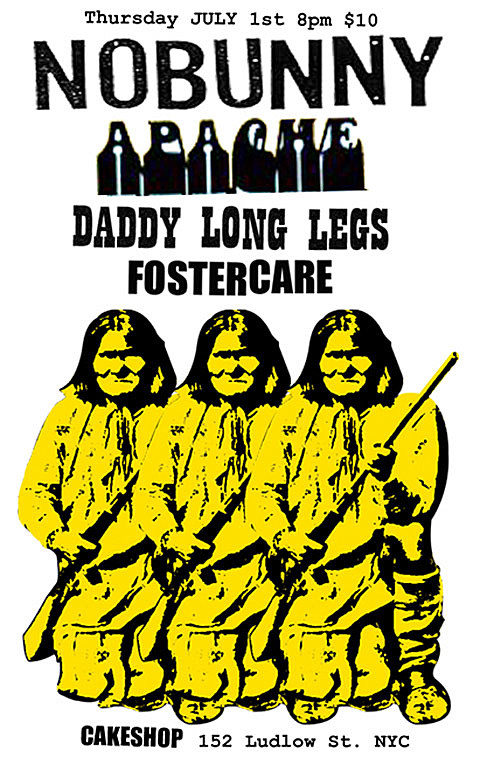 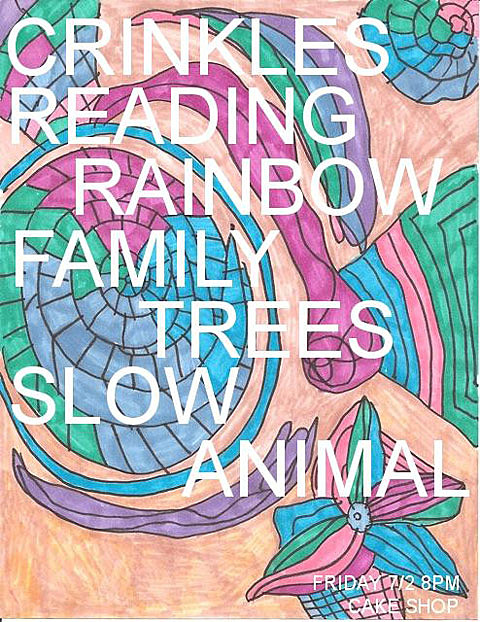 Philadelphia duo Reading Rainbow will face each other as they play Cake Shop. I'm a fan. Also playing are Family Trees' whose debut  7" on the Father/Daughter label is two sides of breezy, '60sish folk pop. It's really quite lovely. You can watch the video for b-side "No One Will Ever Know" at the bottom of this post. Also playing: Slow Animal and Crinkles.

If you missed the Beets at Bruar Falls (or any of their other many recent shows) they play again at Monster Island with rockin' duo Coasting, Alex Bleeker & the Freaks, Dead Glaze and Andrew Cedermark.

If you missed Ribbons' farewell shows during Northside, well you get one last chance to see them play before Jenny Logan moves away next week. They play Don Pedros with Shark?, Les Sans Culottes, and San Francisco's Persephone's Bees. 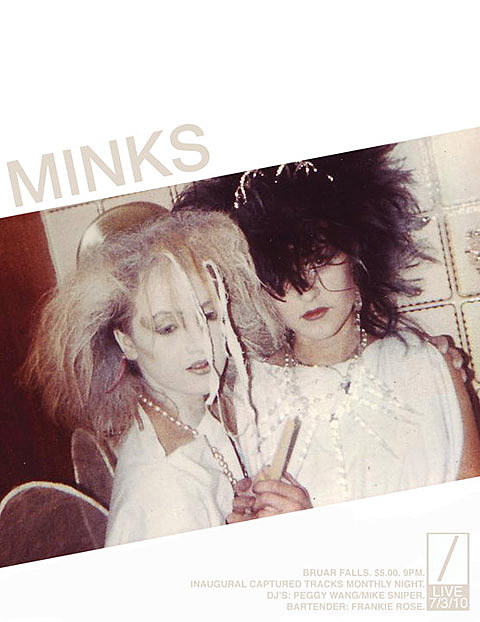 One more chance to see The Beets, this time in Montauk. I'm mainly listing this one because it's got a nice flyer designed by artist-in-residence (and recent addition to the band, on recorder) Matthew Volz. If you like his stuff, he's got a show at the RARE Gallery in Chelsea, that's up through July 24. It's also got a piece from Cassie of Vivian Girls. 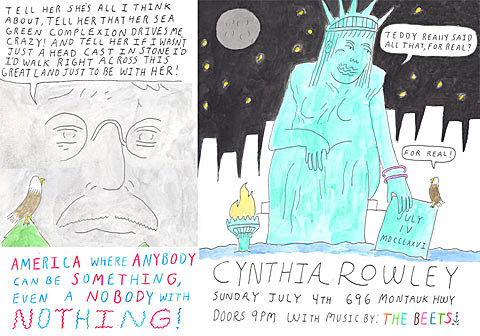 Relive the days of '90s alt-country with a free Old 97s show at the Seaport.

Or spend all day at Shea Stadium. Or maybe just chill at your friend's backyard bbq. It's your choice, this is America!

Family Trees - No One Will Ever Know

FAMILY TREES no one will ever know from amanda finn on Vimeo. 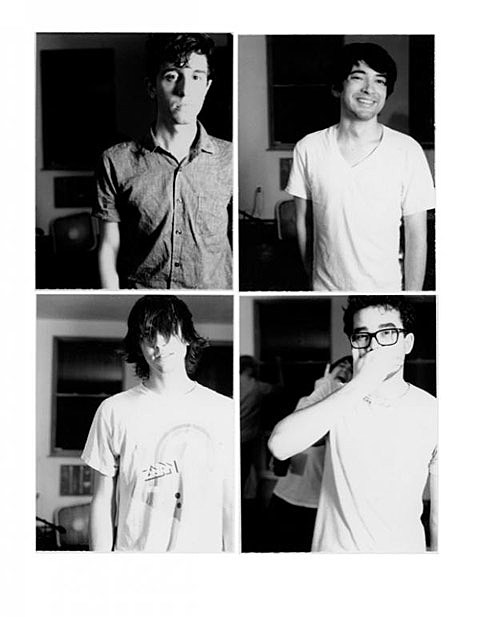