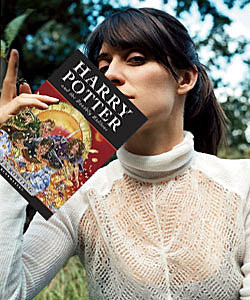 Tickets go on sale Friday for Revenge of REVENGE OF THE BOOK EATERS: a benefit for 826NYC

THE COUNTRY’S MOST CELEBRATED SONGWRITERS, WRITERS, AND COMEDIANS COME TOGETHER FOR AN UNFORGETTABLE NIGHT OF LITERATURE-MEETS-MUSIC TO RAISE MONEY FOR 826NYC, A CHILDREN’S WRITING CENTER IN BROOKLYN, NEW YORK. IN WHICH:

The show is is Sunday August 26th @ The Beacon Theatre in NYC, and hopefully Feist (who is playing McCarren Pool three days later) does more than just READ - maybe even sing with her friends in Grizzly Bear. More info @ BookEaters.org.