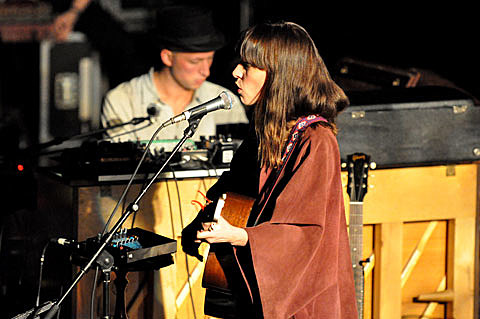 As mentioned, Feist has an upcoming NYC show at Radio City on May 5. Tickets for that show are on AmEx presale now and go on sale to the general public on Saturday (2/4) at 10 AM. We're also giving away a pair of tickets to the show. Details on how to enter the contest are below.

It's since been announced that the show is part of an entire North American tour, which also includes Stubb's and Coachella. All dates are listed below.

Feist also has a new video for "The Bad In Each Other," off 2011's Metals. The video was directed by Martin de Thurah, who has also recently directed videos for James Blake. Watch it below.

--
For a chance at winning tickets to see Feist at Radio City: Either tweet something that includes both @brooklynvegan & "Feist" in the tweet, AND/OR send an email to BVCONTESTS@HOTMAIL.COM with the subject line "Feist" with your first and last name in the email. We'll pick a winner at random and contact them with more details. If you email your entry, your email will not be shared with anyone else. Good luck!
--