Robert Mitchum in 'Night of the Hunter' 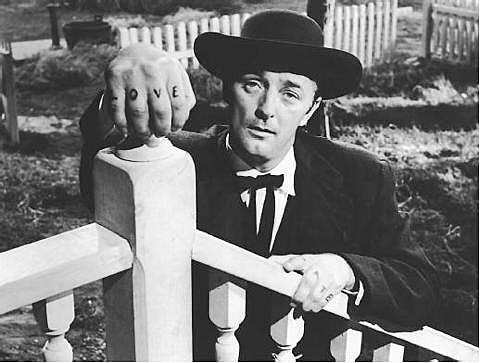 Newly-crowned Polaris Music Prize winner Feist will be in NYC next week to discuss Charles Laughton's classic 1955 film Night of the Hunter which will be part of The Modern School of Film's Film:Acoustic series. The screening and discussion, hosted by Robert Milazzo, happens Wednesday, October 10 at the Mark Miller Gallery (92 Orchard) and tickets are on sale now.

Feist will not be performing, just talking about one of the greatest (and most gorgeous-looking) thrillers in American cinema, and any chance to see it -- Laughton's only film as a writer/director -- on the big screen should be taken advantage of. For those who can't make it, it's also available on a great-looking Criterion Blu-Ray and DVD. Trailer for the film is below.

Also upcoming in MSF's Film:Acoustic series will be a screening of the Jonathan Demme-directed Talking Heads concert film Stop Making Sense at City Winery on October 17 with a post-show discussion with the band's rhythm section, Chris Frantz and Tina Weymouth (aka the Tom Tom Club, who are also in the film). David Byrne (who we can't get enough of lately), no real surprise, is not involved with this event (among other reasons, he's still on tour). Tickets are still available and the trailer is below.

Tom Tom Club, meanwhile, have a new EP and play Brooklyn Bowl on November 1 to which tickets are still available.

'Night of the Hunter' trailer