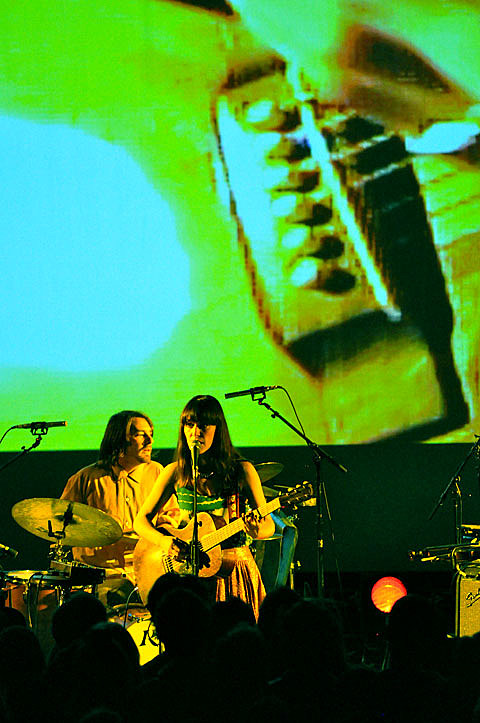 Feist has a huge international tour on the way, including Australian dates this weekend and into February, followed by a number of European dates during March, some of which will be supported by M. Ward (who has his own upcoming tour). She'll work her way back to North American in April when she plays the sold out Coachellas, and has just announced another show happening on this side of the Atlantic at NYC's Radio City on May 5. It's her only other US date announced at the moment. Tickets go on sale Saturday, 2/4 at 10 AM.

In other news, she recently was interviewed by The Weekly Feed, where she talked about 2011's Metals, jamming with fellow Canadians Sloan, and her upcoming split 7" with Mastodon, which will feature each artist covering the other. She's still not sure which song she's picking but promised via twitter that "if people are expecting a cute twee cover of a metal song they have a big surprise comin." Here's what she said to The Weekly Feed about the project:

Oh my god, what a task. What an insurmountable mountain to try to cover Mastodon. We're working on it right now and I'm trying to figure out what song even. I haven't figured that out even yet. But yeah, I hugely admire them and I kind of come from that world. That's where I cut my teeth when I was 15/16 going to metal shows, and in my first band our guitar player probably would've wanted to be in Mastodon if Mastodon had existed at the time, you know? So it definitely speaks to me. When I saw them play on Jools Holland, that's how I was first introduced to them. We played that television show in England together and it just went right to my bones, and after the show we kind of had this, "oh man we should something!" you know? Which didn't seem like it was gonna happen, but now it seems like it's gonna happen, they announced it on MTV so now it's happening.

You can listen to the entire interview below.

Also below is a stream of Beck's remix of Metals single, "How Come You Never Go There," which you can also purchase at iTunes.