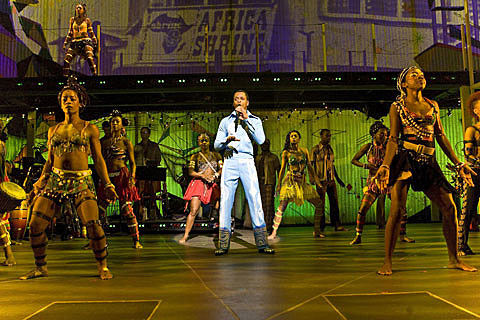 Fela!, the musical based on the Afrobeat pioneer's songs and life, has been running on Broadway since November - this upcoming November it'll be expanding to London's National Theatre - with its two Broadway leads (who alternate nights now) splitting US and UK duties.

The show is more of a concert with a story than a typical Broadway experience. It's a worthwhile night (if a bit expensive, though you can usually find discount tickets), and it goes without saying that the music is superbly performed by the house band, comprised of mostly Antibalas members. Though it's seated, prepare to get up and dance: the strongly encouraged crowd participation is one of the show's more unique aspects (check it out in the video below).

Fela Kuti's complex and often controversial views (on politics, women, AIDS) are condensed for the purposes of the show, but the amount of drugs, sex and politics included is still considerable. And it's hard to argue with New York mag's assertion that "if you don't spend a portion of Fela! staring at the amazing asses onstage, you're just not doing your job." The show has also raised a larger debate about authenticity and representation with regard to Fela and his music. A big feature in the Voice last fall discussed some of those issues at the start of the Broadway run (the show tightened up considerably from its Off Broadway version). Another more recently written good read is Afrobeat blog's response to the claim of one Times critic that the show is culturally insensitive..

Information on discount tickets can be found here.

A big implicit part of the show is the continuing Afrobeat revival outside of it. Around NYC, Antibalas and its associated acts have been central to that. Those groups, that include Amayo's Fu-Arkist-Ra and Ocote Soul Sounds, play sporadically around town. One of them, Stuart Bogie, sax player for Fela! and Antibalas, and his band Superhuman Happiness performed last night at Union Pool, for a show with Nomo, In Tall Buildings and Natalie Bell.

Off stage, Knitting Factory Records is in the process of reissuing Fela's catalog, and it'll be releasing an original cast recording of the Broadway show on June 8th, the tracklist of which is below. Their first Fela disc was a best-of compilation, which came out last fall - a track from that is above.

There's also a Record Store Day-only 10-inch EP of Kuti's "My Lady Frustration" and "Wayo" on the A-side and "Lover" + "Eko" which you should at least be able to find at Sound Fix.

Outside of those Brooklyn-centric Fela-influenced acts, there are also two of Fela's sons, Femi (who toured North America last summer) and Seun, who lead their own bands. Femi Kuti and the Positive Force will be back in the US for a tour this July - that includes a July 12th show at New York's City Center. Ticket info TBA.

Videos of Fela! the musical and Fela the performer, cast CD tracklist, and all Femi tour dates are below...