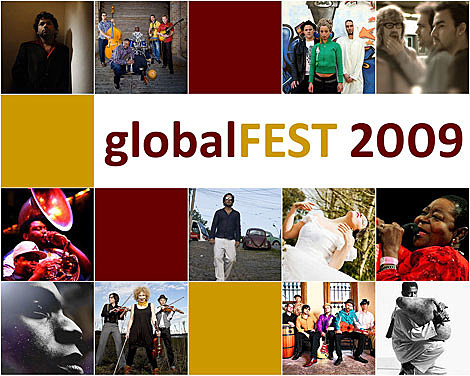 On the eve the release of his first studio album in seven years, Femi Kuti has confirmed a U.S. tour that will see the Afrobeat legend play venues from coast to coast in January 2009.

Femi's forthcoming album, Day By Day, is set for release November 18 and will be the first release from the new Downtown Records imprint Mercer Street Records. Femi launched back onto the public stage this fall when he was featured on emerging artist and label mate, Brett Dennen's hit, "Make You Crazy."

Not content to merely follow in the footsteps of his famous father, Fela Kuti, Femi continues to expand his musical palette with his latest studio release, Day By Day, a hybrid of Afro-pop, jazz and urban influences. Femi is world renowned as a gifted songwriter and performer who continues to push the boundaries of Afrobeat rather than resting on his legacy. He has toured America with alt-rock band Jane's Addiction, sang on Rachid Taha's Made In Medina album and reached out to the American hip-hop community connecting with artists such as Mos Def, D'Angelo, Nile Rodgers, Erykah Badu and the Roots.

Femi Kuti is headlining Webster Hall in NYC on January 8th. Tickets for that show go on sale Friday at noon (with the Am Ex presale starting 2 days earlier). THEN, just three days later, Femi will be back in NYC to play Webster Hall again, but that time as part of the 13-band bill packaged together as GlobalFEST 2009.

For the sixth year, this leading showcase for international sounds keeps a foot in the door of cultural exchange, giving dozens of musicians access to the national stage. The event takes place on January 11, 2009 on three stages at the newly remodeled Webster Hall in New York City. With just one ticket, festival-goers can see thirteen acts in one night, representing diverse global styles, from groundbreaking hybrids to little-known traditions, and in three unique settings under the same roof.

Tickets for that are already on sale. Any recommendations on that bill? All Femi tour dates below...