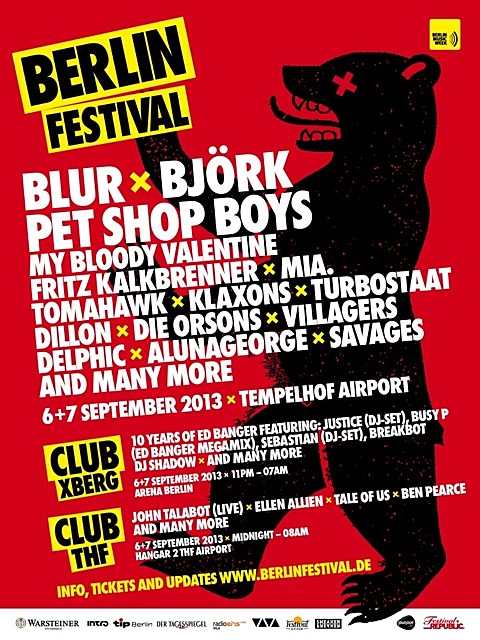 The big festival season may be coming to a close now that Labor Day is behind us and it doesn't really feel like summer anymore, but of course that doesn't mean there aren't any to still look forward to (though many are in warmer places than here in the Northeast).

One festival that will take an airplane ticket and a passport to get to from the US, but has a lineup that might make it worth it, is the Berlin Festival in -- you guessed it -- Berlin. It goes down this weekend from September 6-7 and includes Blur, Bjork, Pet Shop Boys, My Bloody Valentine, Klaxons, Savages, Justice (DJ), John Talabot (live), and more. Tickets for the festival are on sale now. Full schedule here.

In October, Austin gets the previously discussed Austin City Limits Festival for two weekends (10/4-6 & 10/11-13) with Depeche Mode, The Cure, Atoms for Peace, Phoenix, Wilco, Vampire Weekend, The National, passion Pit, Queens of The Stone Age, Arctic Monkeys, Kendrick Lamar, Franz Ferdinand and more. Weekend passes for weekend 2 and VIP options for both weekends are still available. Check out the schedule here. If you'll be in Austin for the festival, don't forget to catch some of the official late shows too.

Though it's not quite a "festival," NYC will be bombarded by a whole slew of bands this fall when a big portion of the music industry heads our way for the 2013 CMJ Music Marathon, which runs from October 15-19. Confirmed artists include The Dismemberment Plan, Pelican, Jacco Gardner, Good Riddance, Godflesh, Eagulls, Courtney Barnett, The Long Winters, Savages, Yamantaka // Sonic Titan, Eleanor Friedberger, Kevin Drew, Obits, Fuck Buttons, Quadron, Speedy Ortiz, Lawrence Rothman and more. Badges are on sale now.

And right as CMJ is ending in NYC, San Francisco will be getting its two-day Treasure Island Music Festival (10/19-20). That festival includes Atoms for Peace, Beck, Animal Collective, James Blake, Japandroids, Disclosure, Tricky, Little Dragon, and more. Tickets are still available. Check out the full schedule.