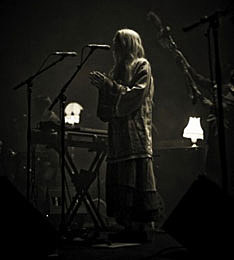 Fever Ray (aka Karin Dreijer Andersson of The Knife) will bring her highly anticipated live show to North America this Fall. The tour begins with two performances at NYC's Webster Hall, a fitting venue for the launch of Andersson's return to the North American stage. In 2006 Andersson and brother Olof Dreijer - performing together as The Knife - debuted live to U.S. audiences with two sold-out shows at the acclaimed venue. This time, now supported by a four-piece band, Andersson's Fever Ray persona will be the main attraction.

Swedish multimedia artist Andreas Nilsson - who designed The Knife's live show and directed the video for her debut single "If I had A Heart"- is also the visual mastermind behind Fever Ray's live show. In designing the show Nilsson drew from his experience with the album. "The album has a mixture of acoustic and electronic sounds... something hard and visionary combined with something that is more organic. The live show should embrace that feeling," says Nilsson.

No ticket info yet. A short video glimpse of Fevery Ray's live show, other videos, and all dates below...

"To see Fever Ray perform live is to enter a darkly compelling world of exquisite mystery. "Andersson may keep her face hidden, but the ascetic intensity of her performance is such that her soul is bared... [She] pulls you inexorably into the darkness of her world," said The UK's Guardian in their review of Fever Ray's debut UK performance at London's Royal Festival Hall in April 2009. "Andersson holds her audience utterly spellbound...She may hate the limelight but she has presence to burn" said the UK's Drowned In Sound in their review of that same show. "