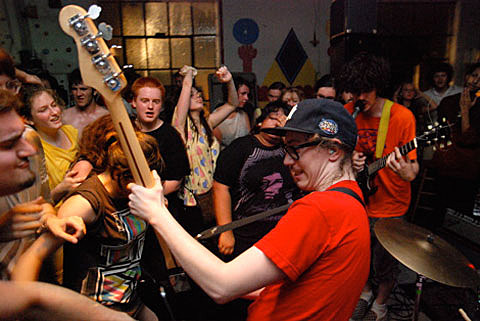 All good things must come to end, like the Star Wars trilogy, the Roman Empire, and the Montreal Expos and Fiasco is no exception. We feel that it is time to move on to other projects, especially with the fact that one member has switched coasts and is trying to permanently live there (sorry for the East Coast betrayal). As some of you may know, we are notorious for not getting our shit together. The new t-shirts are still in a basement in Chinatown, and we still haven't released our newest album which was recorded before we all started college (year number 4 coming up by the way). The lack of not having our proverbial "shit" together has cost us momentum. For this reason, "The Front" will be released, as well the rest of our discography, for free on Bandcamp in the coming weeks...

...The seven years we were a band were absolutely fantastic. We all feel we've accomplished a lot (two full length albums, two tours, made it to South by Southwest twice (unofficially and officially) and played shows in 3 different countries. It's been a blast, and we'd like to thank each and every one of you especially all the people who gave us opportunities to get our music out to the world. (A full list of "thank yous" is coming soon.)

For the record, we were a noise-pop-math-punk band. Don't you forget it.

ps. if any of you want to buy our bass half stack, or a giant-ass bass cab for a reasonable price, email us at thefiascoband@gmail.com or keep your eyes on craigslist. - [Fiasco]

Brooklyn noise-pop-math-punk trio Fiasco called it quits last month. They've announced that before leaving for good, they'll play their last show ever and it happens in their hometown of Brooklyn on Friday (8/24) at Shea Stadium with Dope Body, No One and the Somebodies, Infinity Shred (formerly Starscream), Butter the Children (mems. Sweet Bulbs, Night Manager), and Cave Cricket.

No sign of Fiasco's final album, The Front, on their Bandcamp yet but you can stream their 2008 LP, Native Canadians, below.