FIDLAR in LA in October (more by Wei Shi) 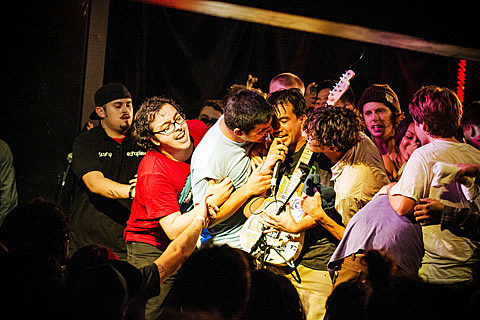 Slacker punks FIDLAR are on tour now with Delta Spirit and JEFF the Brotherhood and that tour will hit NYC on Tuesday (11/27) at Irving Plaza. Tickets for that show are still available, but if you'd like to catch FIDLAR in a more intimate (read: sweaty) location, you're in luck because they've added a last minute NYC show happening TONIGHT (11/26) at Shea Stadium with Big Ups and Big Tits. Admission is $6 at the door.

FIDLAR also recently made a video for "Cheap Beer," the opening track on their self titled debut LP, which is due out on January 22 via Mom & Pop. You can check out that video and a list of all dates below.

* with Big Ups, Big Tits
# with Delta Spirit and JEFF the Brotherhood