Field Mouse at Brooklyn Bowl in 2012 (more by Jessica Amaya) 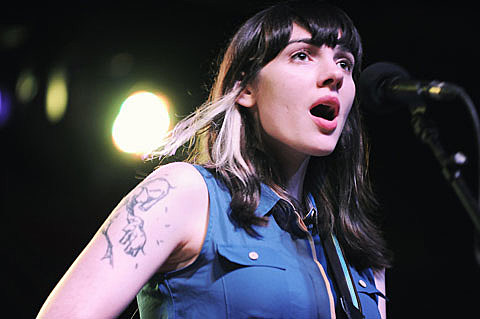 Brooklyn pop shoegazers Field Mouse, who have been regulars on the local scene for a few years now, have announced that they've signed to Topshelf Records (You Blew It, TWIABP), and will finally release a new full length album via their new label on July 22. The album was produced by the band and mixed by Swearin's Kyle Gilbride (who also produced Upset and Waxahatchee). No word yet on the tracklist, but you can watch a video of the band playing unreleased song "Everyone But You" plus recent singles "Tomorrow Is Yesterday" and "How Do You Know" in their BV Studio Sessions video, below.

As usual, Field Mouse have NYC-area dates coming up, including SUNY Purchase's Culture Shock and a Brooklyn show on May 26 at Cameo with Lithuania and Grassfight. Tickets for the Cameo show are on sale now.

In related news, Richmond rockers Sundials also announced their signing to Topshelf this week, and they'll release a new EP on the label this year. They begin recording it with producer Mike Bardzik (who also did their last LP, When I Couldn't Breathe) this weekend. That album and their 2013 compilation Always Whatever came out on Asian Man.