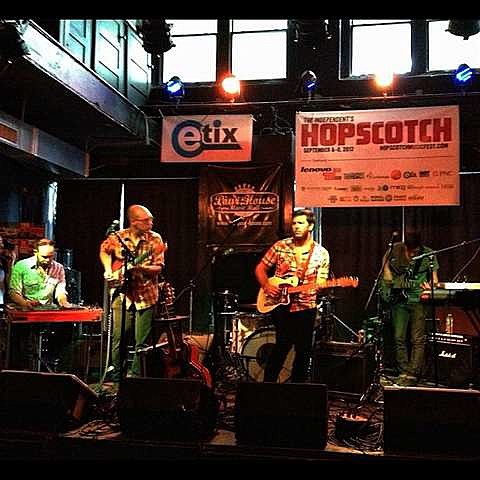 Field Report (aka former DeYarmond Edison member Chris Porterfield) put out his self titled debut LP this week (9/11) via Partisan Records. Like the singles led us to believe, it's a bare, somber folk album with a twang to it, and a pretty enjoyable listen. You can stream the entire thing below.

As mentioned, Field Report will be touring with Aimee Mann later this month, but before that tour begins, they'll play a last-minute release show in NYC this week, which happens at Union Pool on Thursday (9/13). Admission for that show is $7 at the door and we're also giving away a pair of tickets. Details on how to enter to win tix are below.

Field Report also just played our BrooklynVegan day party at Hopscotch in Raleigh, NC this past Friday (9/7). A picture of their set from that show is above, and a list of all dates, those contest details, and the album stream are below.

--
For a chance at winning tickets to see Field Report at Union Pool on Thursday (9/13): either tweet something that includes both @BrooklynVegan AND "FIELD REPORT" in the tweet, or send an email to BVCONTESTS@HOTMAIL.COM with the subject line "FIELD REPORT". Include your first and last name in the email. We'll pick a winner at random and contact them with more details. If you enter by email, it will not be shared with anyone else. Good luck!