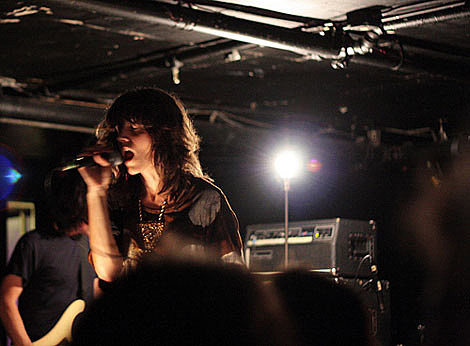 "Eleanor kept mentioning how most of the new songs were about ex-boyfriends, and at one point was almost apologizing for that fact, joking that they were now out of ideas. She shouldn't be so concerned. I love the more obscure and whimsical topics that have come up in past Furnaces releases, but I welcome this more straightforward, emotionally driven material. They've done it before, but it's never been as bittersweet as this, nor as neat and soulful. It was time to shift gears, and they made exactly the right decision -- their melodic sensibility is front and center, the preciousness is dialed down considerably." [Fluxblog]

Fluxblog's review refers to the June 11th show at Le Poisson Rouge where the Fiery Furnaces played a complete and re-arranged version of their new album I'm Going Away (out July 21 on Thrill Jockey). Setlist below. New studio-recorded track from that album, above.

On August 9th, the Fiery Furnaces will join Simian Mobile Disco (who are playing DJ) on the bill of the free JellyNYC Pool Party at the Williamsburg Waterfront. Finger on the Pulse are also DJing at this one. All FF dates below...