Fight Amp at Union Pool in 2012 (more by Markus Shaffer) 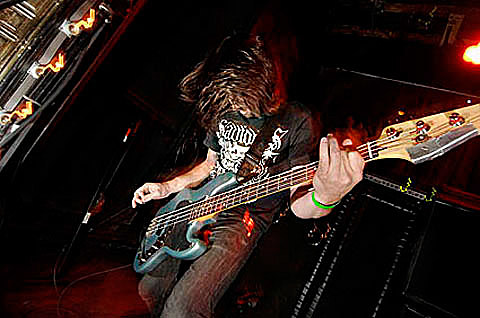 How many bands does it take to make a concertgoer deaf? WHAT? I CAN'T HEAR YOU. I WAS AT A FIGHT AMP SHOW.

Fight Amp, the Philly noise rockers keeping the old AmRep flame lit, will be embarking on a short tour in July. They'll be joined by their sonic twinsies in the ten-tons-of-grit that's San Francisco's Kowloon Walled City -- who are making their sole East Coast stop for 2014 -- and the catchy hook slingers of Baltimore's grungy Roomrunner. The tour begins in Philadelphia on July 15, darts towards the coast for two days, and then comes to a close in Columbus, Ohio. On July 16, the three bands will add Primitive Weapons for their Saint Vitus engagement in NYC. Tickets for that show are on sale now.

All three bands have found success with their take on the ultra-heavy guitars, lurching basslines, and tight rhythms that categorized early '90s bands like Cherubs, Tar, and Unsane. Yet, don't call them revivalists as each twist the feedback squalls with their own identities. Fight Amp, who are hard at work on a follow-up to 2012's Birth Control, find a way to integrate hypnotic repetition within their pummel. Same goes for Kowloon Walled City, adding a much needed dynamic sense to their sludgier songs. Then, Roomrunner reads like an outlier, what with their bordering on power pop infectiousness, yet they whip their equipment into a similar frenzy, using a low wum as a weapon. Should be fun.

All dates are listed, with streams from the bands, below...