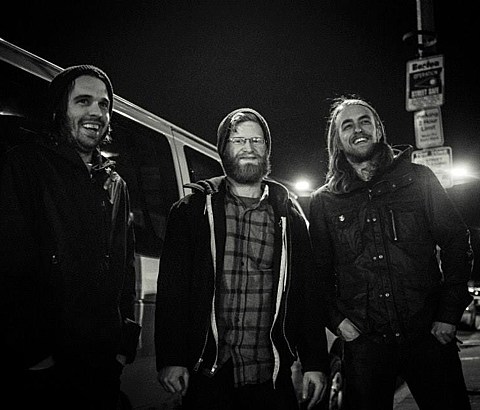 Philly noise rock/post-hardcore rippers Fight Amp are releasing their new album, Constantly Off, on June 9 via Brutal Panda (pre-order). They already put out one single, the sludgy slowed-down "Ex Everything," and we've now got the premiere of the much faster "Survival Is Strange." The band describes it like this:

When I wrote it, it was heavily Queens of The Stone Age influenced, and I sort of thought of it as a QOTSA song played on speed or a heavy sludge punk version of Hot Snakes. The lyrical themes are about trying on different personalities for the sake of being loved.

I'd also add that anyone into classic AmRep stuff or METZ should check it out. Listen to both songs below.

As previously mentioned, the band are about to tour with likeminded band KEN mode, which hits NYC on June 18 at Saint Vitus. That show has solid local support from Pyrrhon and Couch Slut, and tickets are still available. It doubles as the release show for Pyrrhon's Growth Without End EP (due 6/2 via Handshake Inc).

Pyrrhon also play the Horrendous show at Vitus this month, and Couch Slut also just announced a NYC show with Pile and The Austerity Program.

All Fight Amp/KEN mode dates are listed, with the new FA songs, below...