New Final Fantasy tracks are popping up all over the Internet. There's some wong tour dates floating around too. I posted them for about a minute the other night. Final Fantasy (Owen Pallett) is NOT playing May 1st in NYC. He IS playing on June 24th though... 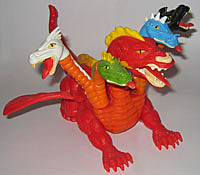 "His new album, He Poos Clouds, will be released on Tomlab Records and marks a bold step forward in ambition and scope, using the Eight Classes of Magic from venerable role-playing game Dungeons and Dragons as a jumping off point.

While the writing of most albums begins with a series of abstract ideas, solidified slowly throughout the recording and mixing processes, Owen Pallett, making records as “Final Fantasy,” set out with a plan. More specifically, he began with a list. Before beginning work on He Poos Clouds, he put together the following guide in order to help make the album a fantasy-based reality:"