Owen Pallett aka Final Fantasy concludes his tour with The Mountain Goats at The Bell House in Brooklyn tonight (12/2). Their second to last stop together was last night at Webster Hall (that's a picture from the show above). Final Fantasy also appeared on IFC's Dinner Was the Band last night. He performed "Keep the Dog Quiet" at both shows, but only talked about how he was vegan until he decided to eat lamb one day on the IFC one. Video from the TV show was previously posted HERE. A picture of the Webster Hall setlist is below.

To celebrate the January 12th release of Heartland, Final Fantasy will be playing several shows, including dates in San Francisco, Chicago, and New York City. The third Final Fantasy full-length and the first for Domino Records, Heartland is the product of nine months of work in four countries. It is a fully orchestral record, designed to exist simultaneously as an album, a 45-minute piece of orchestral music and a set of songs for looped violin and voice.
Owen Pallett explains Heartland:
"The songs themselves form a narrative concerning a farmer named Lewis and the fictional world of Spectrum. The songs are one-sided dialogues with Lewis, a young, ultra-violent farmer, speaking to his creator. The album was compositionally modeled upon the principles of electronic music. The principles of analog synthesis informing symphonic writing, like an inversion of a Tomita record. These songs, too, were designed to be as dense with polyphony as the Final Fantasy live shows can become. While writing it, I kept an image in my head of putting so many notes on the page that the paper turned black. This record encapsulates a whole year of work for me, and was difficult to see through, but I'm immensely proud of the results. I hope you enjoy it."

Those new dates include January 18th at Bowery Ballroom. Tickets go on sale Friday (12/4) at noon. All dates, the new album cover art and tracklist, and a video below... 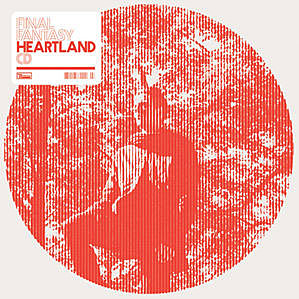