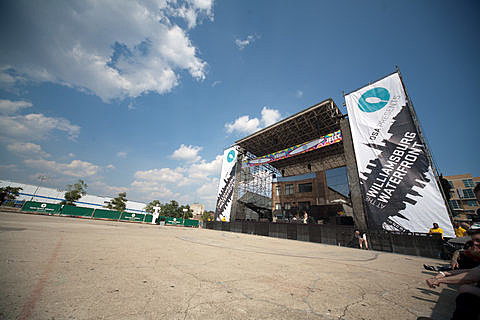 Whoah. Earlier today I got a tip, from someone that would know, that the final (August 29th) Pool Party has been cancelled. While trying to confirm that tip, I got the below insane press release from the "Law Offices of Adam D. Perlmutter, P.C.". Adam also happens to be on the board of OSA

"The Open Space Alliance for North Brooklyn (OSA) is a nonprofit that raises funds and works with our community, elected officials and the New York City Parks Department, to improve existing parks and help create new parks in North Brooklyn."

There are some weird dates mentioned in the release (update: a fixed press release was sent out), but its consistent with my tip. The press release (which I confirmed with a 3rd source after it was sent) also says August 29th is cancelled. That's the day that was billed like this:

Basically the press release says that OSA hates Jelly and so no more Pool Parties (except August 22nd with Chromeo which is still apparently happening). I wonder what Schumer thinks. Check it out in full below...

The Open Space Alliance for North Brooklyn (OSA), through its programming arm OSA Presents, announced today that payment default by JellyNYC, LLC (Jelly) forced the cancellation of the August 29th summer concert at East River State Park on the Williamsburg waterfront in Brooklyn. The [non-Jelly] concerts scheduled for September 14, 19 and 30 will take place as scheduled.

"We are deeply disappointed that the August 29th show has been canceled due to the continuing unmet financial obligations of the event's promoter, Jelly," said Adam Perlmutter, Board member of OSA. "Over the years, we provided generous financial subsidies and other forms of support for Jelly's concerts in order to keep the Sunday shows free to the public. But, as a community-based non-profit, OSA can no longer cover both the costs of putting on these events -- equipment, labor, and payments to the State for use of their park -- and Jelly's substantial debt. Our primary concern is improving open space in North Brooklyn, and we will not endanger our mission by putting the finances and reputation of our organization at risk by allowing Jelly to slide on its financial obligations."

"We are proud to continue to provide many other forms of programming in our parks this summer, including some of music's biggest acts. Ultimately, our neighborhood and those who care about open space deserve to see improvements to our parks, as well as free programming in them. We remain committed to providing free concerts in North Brooklyn in the future, expanding and diversifying offerings to better serve our entire neighborhood."

"The abrupt end to the concert series is certainly unfortunate," said State Parks Regional Director Rachel Gordon. "Although there will be disappointment, the public should know that we will continue to host concerts in the park, as well as other activities, programming and resources that will benefit the people of Williamsburg and continue to add to its unique landscape."

OSA became formally involved with the North Brooklyn concerts in 2008 when NYC Dept. of Parks & Recreation issued a bid to produce the shows at McCarren Park Pool. When industry professionals did not wish to take the overall financial risk and management responsibility for building the stage and providing the necessary support infrastructure, OSA stepped forward. OSA produced the McCarren Pool concerts to insure that free community programming, including Jelly's concerts, continued. Also, with OSA managing the concerts, rather than a private company, proceeds would go directly back into community parks improvements. The pricing OSA provided to JellyNYC was 85% less than ticketed concerts, in order for the local community to enjoy free programming.

As the Pool moved into reconstruction, OSA sought an alternative venue for the shows. In 2009, OSA, through OSA Presents, negotiated with NY State Parks who graciously allowed the concerts to continue nearby at the East River State Park on the Williamsburg waterfront. Although there were substantial operational difficulties in working with Jelly, OSA Presents gave Jelly another opportunity in 2010.

This summer, continuing the model at McCarren Pool, OSA Presents hosted ticketed shows to subsidize free programming and raise funds to improve our local parks. This summer, Jelly was given free fixed infrastructure, as well as substantially discounted labor for its shows.

OSA and OSA Presents expressed regrets to the two artists JellyNYC confirmed with the venue for 8/29, Delorean and Dominique Young Unique. This summer, OSA Presents hosted the first East coast appearance of Faith No More in more than a decade; new diversity in North Brooklyn programming with Nas/Damien Marley; as well as Weezer, Band of Horses/Grzzly Bear, Primus/Gogol Bordelo, and more. Still to come in September, it is presenting Modest Mouse 9/14, Pavement 9/19, and Belle & Sebastian 9/30.

The Open Space Alliance for North Brooklyn (OSA) www.osanb.org is a nonprofit that raises funds, links community volunteers and works with our local elected representatives and government agencies to improve and create parks in North Brooklyn.

OSA's 2nd-to-last paragraph seems to imply there was nobody else booked on that date. That may or may not be true.

The last Pool Party was August 15. The next and now-last (?) one is happening August 22 with Chromeo headlining.

Stay tuned for Jelly possibly getting this reversed, or a new venue for Delorean, or anything else that unfolds.