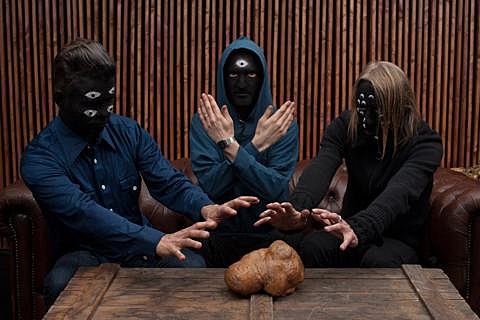 Finnish trio K-X-P released their second album, succinctly titled II, this week on UK label Melodic and Manimal Records in North America. The self-described "anti-band" employ elements of Krautrock, early '80s minimal synth as well as the club sounds of big beat and acid house, with some diversions into almost madrigal folk. (I have a feeling they like metal too.) Frontman Timo Kaukolampi spent time for Euro pop factory Xenomania writing songs for Annie (who guests on II) and others. Somehow all these disparate elements work together. It's a cool record and you can stream the whole thing below and check out the video for the bizzarely entertaining "Magnetic North" single below.

We've also got the premiere of a remix of K-X-P's "Easy" by French artist Remain and you can stream that below as well.

K-X-P are plotting their first trip to North America next month, playing SXSW in Austin, and will hit NYC on the way back at Pianos on March 23 with Irish band The Funeral Suits. No advance tickets just yet. The band may line up more NYC shows, so stay tuned. Meanwhile, check out the album stream and videos below.