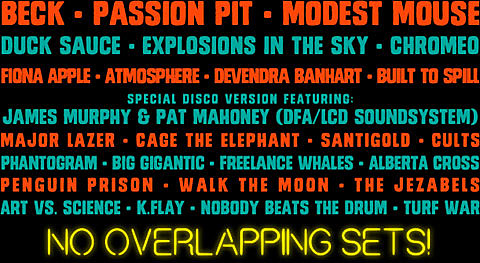 She was added to Sunday. The June Randall's Island fest writes:

We are excited to announce the addition of Fiona Apple to Gov Ball 2012! The Grammy award-winning artist will be touring this year behind her first new album since 2005's critically acclaimed Extraordinary Machine. Machine was named by Rolling Stone Magazine as the 49th best album of the 2000s, and was nominated for multiple Grammys. This past Friday, Apple's select six-show club tour (her first live dates since 2007) was met with incredible demand, and sold out in minutes. Apple's addition to the Sunday lineup of Gov Ball will give new fans, as well as her die-hard following, one of the first opportunities to see her perform live in NYC since her sold out show at Central Park in 2006.

Its an honor to have one of the greatest, and most unique, female singer/songwriters in alternative music grace the stage at Gov Ball this year. We can't wait.

In other NYC festival news, Electric Daisy Carnival is coming.