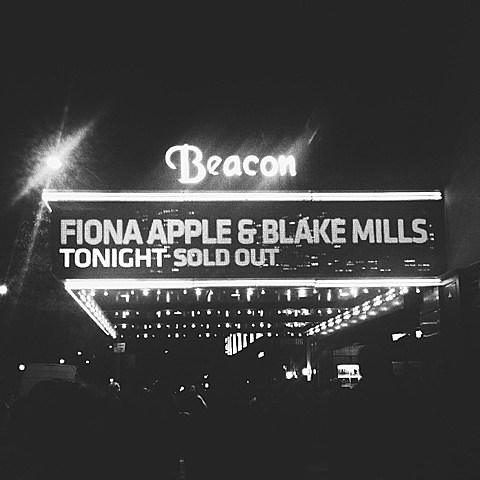 Fiona Apple and Blake Mills brought their "Anything We Want" tour to NYC for two nights at Beacon Theatre this week -- Monday (10/21) and again last night (10/22). We caught night 2.

Apple's 2012 tour stopped in Terminal 5, which struck me at the time as an odd fit. That venue's sound system and acoustics are geared towards loud, pounding rhythms, which meant that Apple's more spare material was often overpowered by even relatively sparse percussion work. The Beacon, with its gentler acoustics and lighter touch on the mixing board, did her music a service.

Though Mills also opened and performed as a side musician for Apple on that tour, this jaunt changed the format -- instead of opening, Mills and Apple took the stage together and traded off songs throughout the set. I'm not wild about Mills's singing, but he's an excellent guitarist. The spiky rake rhythms and legato-heavy leads he added to Apple's tunes worked remarkably well, given the jazzy nature of the material, and he took a few borderline rock-god solo turns during his own songs. He also served as an emcee of sorts for the night -- whenever Apple's stage banter started to wander, he'd step in and move the set along.

Apple, for her part, seemed in good spirits and performed beautifully. (All this despite dressing like an old-school Charlotte Hornets fan out for a jog.) Her body language is often a little childlike, but it was especially so at this show; she'd shimmy her feet in place or hop up and down, like she was impatient for the next chord change. Her set drew from the breadth of her career, though her 2012 effort The Idler Wheel... received better representation than any of her other albums. Apple's band was also briefly joined by ?uestlove on drums for a blazing rendition of "Not About Love" from Extraordinary Machine, which established the set's emotional and aural high water mark.

We also covered this tour over at BV Chicago. In case you missed them, check out streams of new songs "I Want You To Love Me" and "Tipple" (both of which they performed last night), along with the setlist and a pic of Fiona and Questlove, below...

Fiona Apple - "I Want You To Love Me"

a fan holding the setlist (via @aylamargrete) 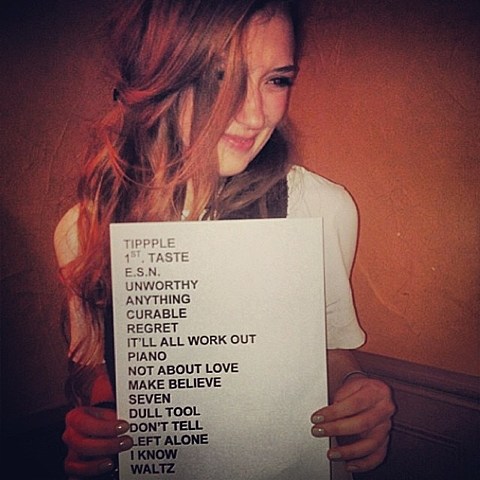 Fiona and Questlove (via John Durgee) 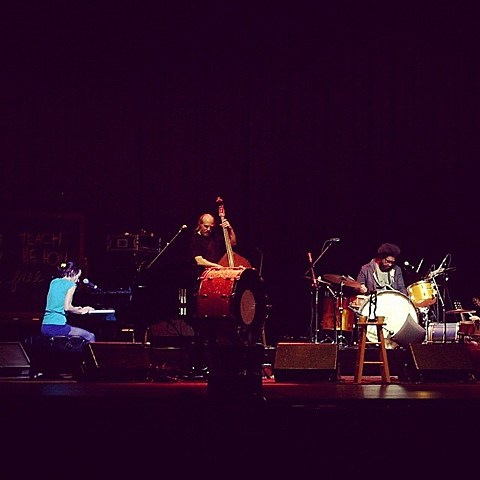