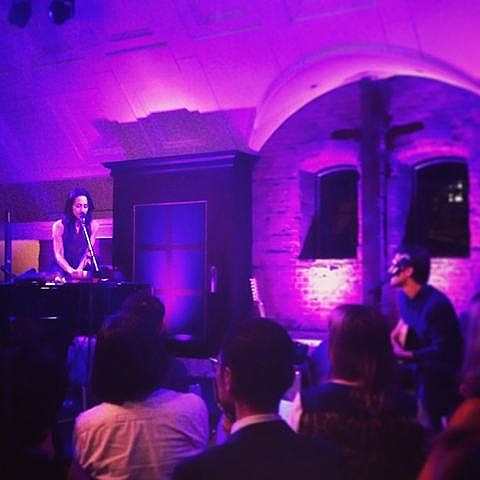 You may have read reports on Friday (8/30) that Fiona Apple walked off stage in a huff during her performance at a Louis Viutton party in Tokyo (8/29) due to too-loud audience chatter. Most reports stemmed from a WWD story:

Apple instructed the audience to "shut the f--k up" and uttered other expletives, both audibly and under her breath, calling the event's attendees "rude." She continued with her set before shouting, "Predictable! Predictable fashion, what the f--k?" as she stormed off the stage. The show was punctuated with other bizarre moments, such as when she hit her head with her microphone, did a back bend over her piano bench and stared intensely at her guitarist as if in a love-struck trance.

Apple has since offered up a few clarifications to what happened, which her soon-to-be-tourmate Blake Mills shared with Twitter:

if it wouldn't be too much trouble,if you could tweet to the twits who call themselves journalists (example chris martins of Sit-and-Spin magazine) that I FINISHED MY SET,I did my job,and they should do theirs too--boy ,would I be grateful.

They all miss the fact that there is a difference between the back-of-the-room-chatter that is simply annoying,--and the Operatic Drunken Blather,or the heckling (which is really just INTERRUPTING) that makes it impossible for us to do our jobs.

I hope most readers are already hip to the fact that they are consistently lied to. In my eyes, these writers have compromised their credibility. they are fiction writers.

And, incidentally, whoever first interrupted Chappelle should have been ass-to-concrete before it grew into something that ruined the show for anyone else.

I understand if you don't wanna,though.
anyway,I love you,see you later...
Fi

The person who took the above instagram also commented on her photo, "it wasn't as dramatic as they mentioned but she threw a few curse words out there for sure!"

Apple makes reference to Dave Chappelle, who also had some unruly audience trouble at the 8/29 Hartford, CT stop on the Funny or Die Oddball tour (which has gone mostly well). While there were reports calling it "another meltdown," the Oddball fest tweeted wrote "Hey Hartford! Pipe down and let Dave Chappelle do his thing!" Ebony writer Lesli-Ann Lewis was there and writes it wasn't his fault:

He had started with some Paula Deen jokes that went over well when he had to stop again. Maybe it was his gratuitous use of the N-word to a mostly White audience. Maybe it was the overpriced beer that, to my amazement, everyone seemed to keep buying. Whatever it was, there was a palpable change. The crowd got rowdier, louder, ruder. Folks started calling out random references to his past work (he informed us that if we ever see him in a Half Baked sequel, that means he's run completely out of money) and, most bizarrely, his 2006 Oprah interview.

After engaging some of the heckling politely, Chappelle had enough. "I've been up here a while now and I thought it was me but now I 'm sure it's you. There is definitely something wrong with you." he told us. In other words, 'shut up and let me perform.' Not many did. Finally, he gave up and took his cigarettes and his water and sat on stage. - [Ebony]

Chappelle apparently stayed on stage for most of his alloted time, though he spent some of it reading aloud from an audience member's book. The Oddball tour has rolled on without incident since then and will be in the NY area this weekend for two shows in New Jersey:  Susquehanna Bank Center in Camden, NJ on September 6, and PNC Bank Arts Center in Holmdel, NJ on September 7. Tickets to both are still available.