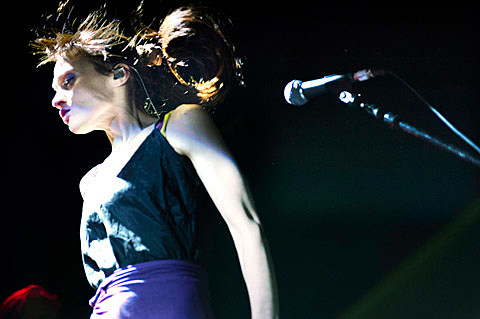 After returning to the stage earlier this year, with shows at SXSW and two BV-presented shows in NYC, Fiona Apple announced a new album (which you've heard a song from). That album, which is titled The Idler Wheel is wiser than the Driver of the Screw, and Whipping Cords will serve you more than Ropes will ever do, comes out next week (6/19) and you can now stream the entire thing on NPR.

FIona also kicks off a tour the day of the album's release, which hits NYC on June 24 for Governors Ball. Tickets for the Randall's Island festival are still available.

The video for "Every Single Night" is below...

Filed Under: Fiona Apple
Categories: Music News
Comments
Leave A Comment
Listen to David Byrne’s “Music For Valentines” playlist
Hear Fiona Apple on a new ‘Lord of the Rings: The Rings of Power’ soundtrack song
Pitchfork publishes a new 150 Best Albums of the 1990s list
Pitchfork publishes a new Best Songs of the 1990s list
Listen to Watkins Family Hour & Fiona Apple’s cover of “(Remember Me) I’m the One Who Loves You”
21 New Songs Out Today