Dan Deacon likes to play in the crowd - not on the stage, but at ground level where he can really get the party started. It makes sense, and works really well at small, sweaty venues, but as those who were at Dan's recent McCarren Pool show in Brooklyn know - Dan doesn't care how big the venue is - his show is his show, and that's not always a good thing for those in the back. Well, at the sold out Pitchfork Music Festival in Chicago this past weekend (July 13-15, 2007)..... 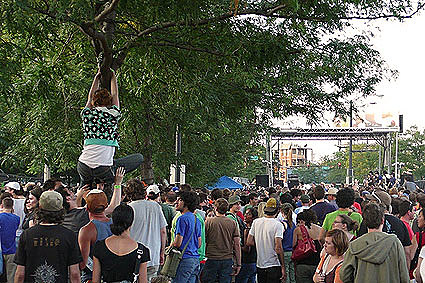 Stage B where Dan Deacon was performing. He was actually set up down on the pavement with the audience (and photographers were on the stage). At least a couple of people decided to climb the trees to get a peek of what was going on. Eventually you could see bodies floating over the audience up near the stage...no not levitating, body surfing! [beardenb]

In its third year at the West Side's Union Park, the Pitchfork Music Festival, a weekendlong celebration of the cutting edge in indie rock, hip-hop and electronic dance music, firmly established itself as a model for how a great urban music fest should be run.

Over the weekend, a total of 47,000 fans, many from across the country, enjoyed more than four dozen challenging and rewarding performances in a sublime setting with generally excellent sound and an inspiring communal vibe. (Although the park could accommodate more, promoters sold out to preset capacities of 17,000 per day Saturday and Sunday and 13,000 Friday night to ensure a comfortable experience.)

Among the attendees: 250 journalists who came from as far as New York, Los Angeles and London to catch a first glimpse of artists pegged as "next big things" by the influential Chicago-based Webzine, PitchforkMedia.com. In fact, the greatest testament to the site's power in breaking new acts was the cause of the fest's biggest glitches: Dan Deacon, an electronic performer from Baltimore, and Girl Talk, a k a DJ Gregg Gillis, drew massive crowds that swamped the smaller third stage, exceeding capacity and forcing the Chicago Fire Department to cut those performances short.... [Chicago Sun Times]

In sadder, but related news, it looks like we lost one of our own due to head explosion over the weekend too. More photos of Dan's packed set by Gaper's Block below.... 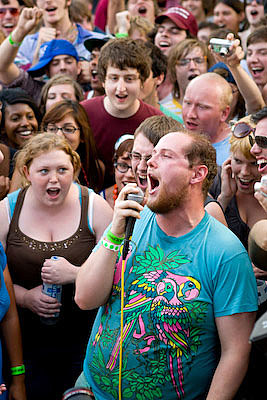 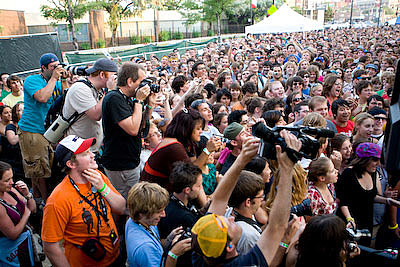 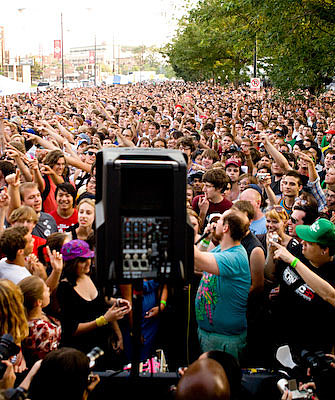