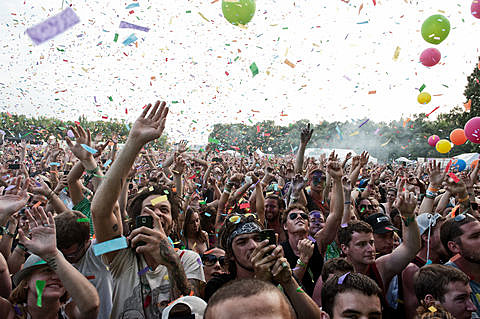 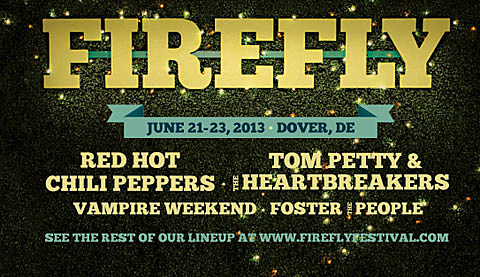 It's been crazy both in and not-in the NYC-area for festivals this past week. NYC was taken over by a very muddy Governors Ball last weekend (6/7-9), and this past weekend (6/14-16), while almost every Brooklyn venue took part in the Northside Festival, Toronto was hosting NXNE and Tennessee had Bonnaroo to name the ones we were most focused on. That's all behind us now, but those who are into festivals still have much more to look forward to this summer including another big one on the east coast this weekend.

This coming weekend, Friday, June 21-Sunday, June 23, the Firefly Music Festival is returning to Dover, Delaware's Dover International Speedway, which is only about a 3 hour drive (directions) from NYC. The festival debuted last year, and like Governors Ball, they've upped their game a bit this year. There will be a bunch of great bands across four main stages, like:

On Friday, there's sets by Django Django, Dr. Dog, Action Bronson, Foxygen, Public Enemy, Grizzly Bear, Red Hot Chili Peppers, Earl Sweatshirt (who was added to the lineup in May) and more. And besides RHCP vs Earl (who start 15 minutes apart), the conflicts that day aren't too bad.

On Saturday, there's sets by Japandroids, Jim James (who replaced Imagine Dragons, so bonus points for that), Kendrick Lamar, Alabama Shakes vs Lord Huron at 5 PM, then CHVRCHES vs Edward Sharpe, Yeah Yeah Yeahs, MGMT vs Azealia Banks, and finally Tom Petty and the Heartbreakers will headline the day, plus still more.

And on the festival's final day, Sunday, you can catch Haim, Matt & Kim, Toro y Moi, Passion Pit vs The Walkmen both going on at 6:30, Vampire Weekend, and more. Plus, if you need to leave early to get home from work on Monday, you can leave before Foster the People's headlining set. Two birds, huh?

UPDATE:Both Earl Sweatshirt and The Lumineers have cancelled, but were replaced by Schoolboy Q & Ben Harper.

And in addition to the main stages, there's some smaller side stuff too, like the Red Bull Sound Select Hub Stage which features bands who have joined the Red Bull Sound Select Program. We aren't familiar with all the bands playing that one, but we suggest you stop by Saturday for NYC's Heliotropes (who, by the way, are playing a record release show in NYC on 6/18, and streaming their new record). The Skins and Oxymorrons are both on that stage too, both NYC bands who we caught when they played the Afropunk-curated RBSS show at Knitting Factory with Danny Brown.

Last but not least, in addition to just being there as fans and covering the festival, BrooklynVegan will be producing two hours of entertainment from 1-3pm each day inside the Soundwave tent, presented by Toyota and Spinmedia, and hosted by musician & BV contributor Billy Jones. Take a look at the festival map - our stage is toward the top left next to St. Jude.

Hosted overall by one of our favorite comedians, Dave Hill, the Soundwave stage will also feature programming by SPIN (5-7 each day) and Hype Machine (3-5 each day) in addition to the BrooklynVegan stuff (1-3 each day). Stay tuned for our full stage schedule, but get there on Friday at 1pm for a live interview with Django Django and look forward to a second performance by and audience Q & A with Amanda Palmer on Sunday at 2pm. More details soon!

Meanwhile, check out the full main stages Firefly lineup and schedule at Firefly's website where you'll also find much more info if you're attending, like the festival map which is also below... 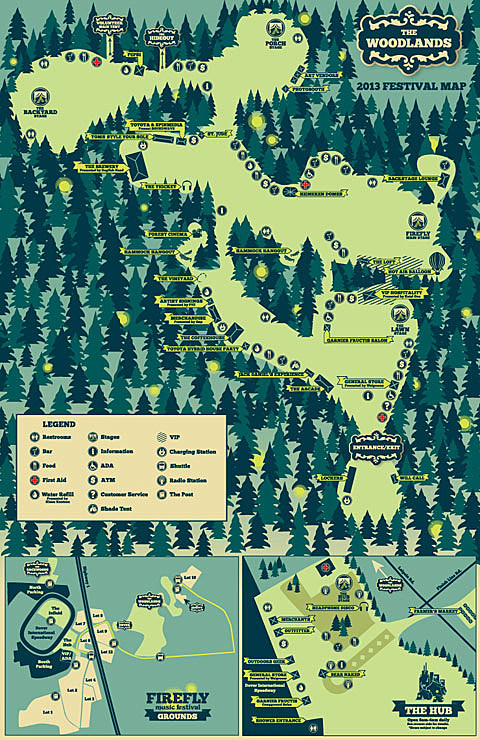