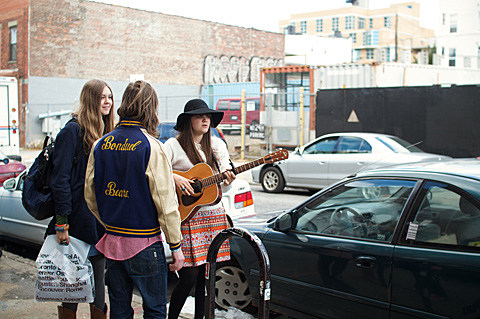 First Aid Kit are currently on a tour with Lykke Li that brings them to NJ's Wellmont Theatre on Thursday (11/17). Tickets still available. As previously posted, First Aid Kit also play a headlining show of their own at Mercury Lounge tonight (11/16 with Alessi's Ark. I hope you got tickets, because not only is that show now sold out...

First Aid Kit will return to NYC on March 28 to headline Webster Hall!! That's quite a jump for the Swedish duo. Tickets for the Webster Hall show go on sale Friday (11/18) at noon with an AmEx presale starting Wednesday/today (11/16) at noon.

The show is part of a tour the band will be on in support of their sophomore LP (2008's Drunken Trees was only considered an EP), The Lion's Roar, which comes out on January 24 via Wichita Recordings and was produced by Mike Mogis from Bright Eyes, who First Aid Kit also recently toured with. The full tour hasn't been announced yet, but the dates we do know about are listed below.

First Aid Kit recently revealed the video for "The Lion's Roar," the title track and first single from the upcoming album. It was directed by Mats Udd, who has directed videos for the band in the past. The song has similar vocal harmonies to the band's first album (2010's The Big Black & The Blue), but the percussion's got a much stronger presence here than on their earlier work. Check out that video along with all dates below...