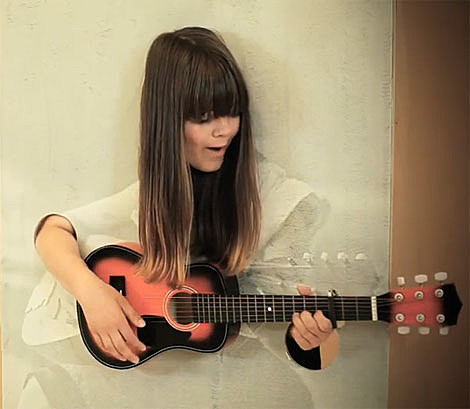 Swedish band First Aid Kit were set to make their U.S. debut at CMJ this year. They had a show scheduled at Joe's Pub, were set to open for School of Seven Bells and The xx at Webster Hall Music Hall of Williamsburg, and play the MusicSnobbery CMJ showcase at Living Room. Luckily, MusicSnobbery got Sissy Wish to replace them on his show.

The cancelation, due to visa issues (the U.S. wouldn't let them in) was just announced, though they seem to allude to it in a message they posted on their website on Septeber 23rd. Maybe they were fighting it. That message and a video below...

September 23, 2009
Friends,
right now we're home just enjoying being at home with our dear family here in Sweden. The weather is lovely and we're preparing for our tour with Fanfarlo. Unfortunately we had to cancel our last shows with Slow Club because of visa problems (for the US), so sorry about that. WE are really sad about it, we had such an amazing time supporting Slow Club those five days. We sang Beyoncé songs, met loads of wonderful people and talked about cheese. It doesn't get much better then that.

We also played at End Of The Road festival, we played in the "Tipi Tent" which was very, very hot! But, we still had a great time and we got to see the great Alela Diane who just blew us away just like we'd expected. Please listen to her if you have not yet discovered her fantastic music! (Yes, that is an order)

As you might have noticed we've taken some new photos, they were all taken by the very talented Eva Edsjö. We are really happy with them so we hope you like them too.

Also we would like to apologize for not uploading any of those Summer Sessions, we have been very busy, finishing the album and touring but we will try to get one up as soon as possible. Thank you so much for your song suggestions, we've found so many new lovely songs we'd never heard before thanks to you!

Slow Club is not coming to CMJ either (they were considering it). Fanfarlo are though.