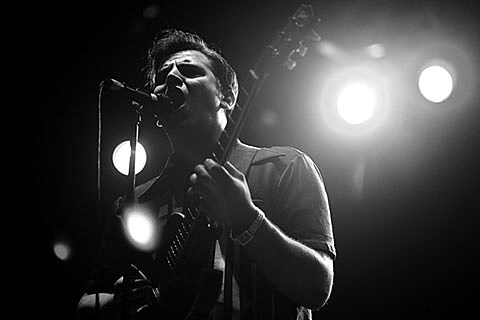 Eli "Paperboy" Reed is back after "what seems like a long hiatus" (according to him)(actually around three months since Bell House and he also played Le Poisson Rouge during CMJ), and will play Brooklyn Bowl on January 12th as part of a five-date Northeastern tour. Tickets are on sale for the NYC show. Full tour sked for the crooner is below.

Manhattan will get some blue-eyed soul of their own in January also, courtesy of Fitz & The Tantrums:

"The Tantrums have built a following in La-La land with an energetic live show and a handful of excellent tunes. As front man, Fitz is charismatic, bringing to mind Brian Ferry with a dash of Sam Cooke.... [but] here's the deal: Fitz and the Tantrums are not a revival band. While their songs all evoke the production values and straightforward songwriting stylisms of the motown/stax era, the music is original. It's what New York Times reviewer Rob Hoerburger calls "the equivalent of a farm-to-turntable groove...pinpoint harmony, sophisticated songcraft, serious vocal or playing chops".

Little did I suspect that I was going to see would be representative of the groundswell of what some critics are dubbing a new wave in the genre. We're talking about eighties' kids of fifties' parents who are making this music their own: Mayer Hawthorne, Eli (Paperboy) Reed, Kings Go Forth, Aloe Blacc, Jamie Lidell, Soul Track Mind, and Fitz and the Tantrums." -[OB Rag]

Fitz & The Tantrums' last appearance at Mercury Lounge sold out, and now the band will headline Bowery Ballroom on January 19th, one week after Reed plays B Bowl, and exactly one month before Kings Go Forth play Southpaw. Tickets for Bowery are on sale.

The Bowery show is part of a larger tour for Fitz and his band in promotion of their new LP Pickin' Up The Pieces which is out now. All Eli and Fitz dates and some videos below...

--
Fitz and the Tantrums - MoneyGrabber

Eli Paperboy Reed - Come and Get It