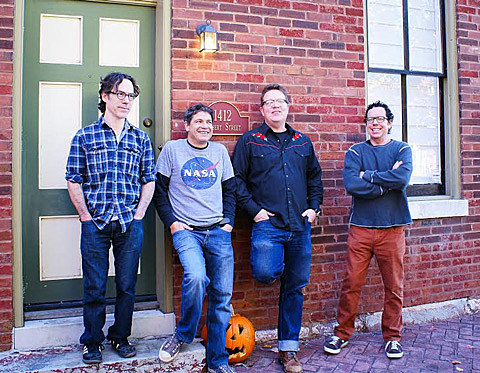 Athens, GA's Five-Eight have been going since the late '80s, fueled by highly-strung frontman Mike Mantione's boundless energy and tales of manic depression. (Literally: their first single, "Looking Up," was about Manitone's view of the ceiling during electro-shock therapy.) The band's 1994 album, Weirdo, is getting reissued this week, with new artwork and five bonus tracks on double-LP vinyl. It's been remixed by the original producer, David Barbe (who was in Sugar at the time) and for him it's a chance to right some sonic wrongs:

When I turned in the finished mixes to the A&R Man, he listened, called me and said, "You have made a great record." His opinion would change. After a couple of weeks he called and complained that there wasn't enough depth to the sound. I pressed him about what he meant, exactly, and we were able to establish that he didn't think there was enough digital reverb. I pointed out that we had talked about what kind of record we were going to make, and that it was less processed than other current records on purpose. I believed that the hyped, over-processed records of the early 90's were going to sound hopelessly dated in time. I can't remember where the phone call ended, but I thought that once he heard it mastered, that he would come around. Boy, was I wrong....

...The band really liked the mastering and it seemed like smooth sailing. Only it wasn't. The A&R Man still did not like it. He started complaining to the band's manager, Warren Chilton, about it, and then to Mike. He wanted Five Eight to give him his own 'Nevermind,' and this was not it.

Needless to say, the A&R Man got his way, but now Barbe and the band are getting theirs. The reissue of Weirdo will be out on Friday (7/10, preorder yours) but you can listen to the remixed/remastered version of "Behead Myself" right now. Stream it below.

Five-Eight's only upcoming show is at Atlanta's Smith's Olde Bar on September 18.