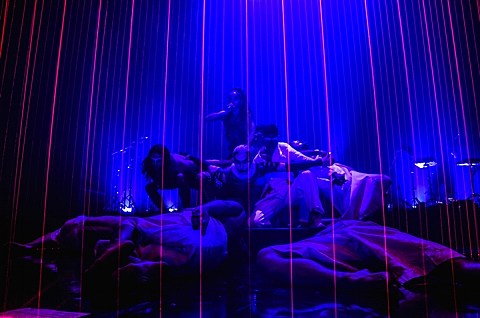 Over the course of two nights, the singer / dancer / producer / choreographer / director will perform two very special concerts at the Brooklyn Hangar. The exciting next step in her evolution, we've given her complete freedom to bring her radical vision to the stage. Accompanied by ten dancers, costumes by Alexander McQueen, and spectacular visuals, this original production not only will this sound like the future, it'll look like it too.

FKA twigs already announced two of her new 'Congregata' shows (description above) to take place at NYC's Brooklyn Hangar on May 17 & 18 during this year's Red Bull Music Academy. Both of those sold out, but she's now added a third show for May 19, which is on sale now.

She recently debuted the show in London, and that's a picture from it above and you can watch a short video clip here.

Last month, twigs put out the video for her Boots collaboration "Glass & Patron." Watch that, with her updated list of tour dates, below...